How did we survive travel in the ’60s? 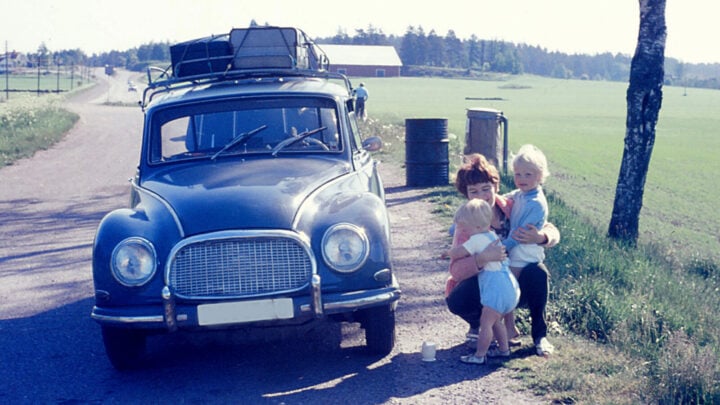 Travel in the 60s was so different. Source: Getty

As one of four girls in a busy family, getting us from A to B was often a bit of a mission. Dad would not buy a car, so rode a bicycle. Mum also rode a bicycle. Both of them had funny little seats on the back which we would sit in, with no strap. We just hung on for dear life. The older sisters wobbled along behind us on their bikes. This was for church on a Sunday. We did not travel very far, so this was our main mode of transport.

However, a trip to town on the bus required some pretty nifty maneuvering. We were either in a pram or a pushchair. These were big, solid, and unwieldy structures, but when we arrived at the bus stop, the bus driver would stop, alight and hang the pram or pushchair on a hook at the front of the bus. Mum always took the baby or child out first. It was awkward if it rained. We then sat on Mum’s knee in the bus with no seat belt, hanging on for dear life as the driver negotiated the corners.

And then Mum got a part-time job and bought a car as Dad refused. It was a nifty little Standard Ten. She loved it. She was sad when she scraped it on the concrete fence post. She swore Dad had moved it in her way on purpose. Even though Dad stubbornly refused to condone the car, he soon became an expert backseat driver with a running commentary until one look at Mum’s grim face would shut him up. No seat belts of course, so we slid around on the seats when Mum took a sharp bend. But at last, we got to see a bit of the local scenery as Mum took us out for Sunday drives and Dad sat quietly beside her.

As a teenager, I rode my bicycle to school – rain, hail, snow, or shine. It was excruciating. We caught the bus the rest of the time until we quietly learned the art of hitchhiking with boys, but we kept that pretty quiet from Mum and Dad. If I went to a dance in town on a Friday night I would walk through the park to the bus. The last bus home was quite late and it required a terrifying walk alone through the dark and creepy park. I would take off my high heels and run the whole way. Terrified a mad rapist would get me.

Now as an old Nanna, I strap the grandkids into various contraptions to keep them safe. But when I look back to those years, I often wonder how we managed to survive the various modes of transport.

Do you have any funny stories to tell?