‘History and hindsight: I’ve come to see the Vietnam War in a new light’ 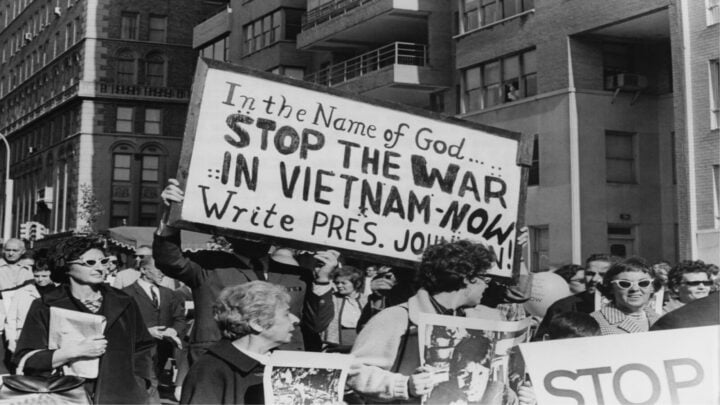 Vietnam War protestors take to the street in the US. Source: Getty

When you feel like wandering down memory lane, in a certain direction that is, it’s hard to beat Ken Burns and Lynn Novick’s doco The Vietnam War. Historically, it’s all there, from the grand strategic sweep to all the tiny vignettes that made its last 10 years such a memorably nasty experience – like punji sticks, fragging and IEDs, Madame Nhu’s ‘Buddhist barbecues’, General Loan “blowing another mind”, villages being burned down “to save them”, and the never to be forgotten William Calley of My Lai.

When killing a bit of time with Mr Burns and Ms Novick in May it was not the hideous detail that engrossed me, but the contemporary responses to the conflict, principally the anti-war movement that ballooned throughout the Western world and beyond. It was not hard to see myself and many thousands of my age cohort in those protests, with the long hair, Zapata moustaches (not the women, of course), flares, Bolshie caps and all the rest of it. And all the chants came back to me, although they seemed rather gauche to the ears from this distance.

While there were big differences between the US protests and those in Europe and Australasia, The Vietnam War’s footage showed much in common: a universal feeling among the young, especially among the upwardly mobile, middle-class young, of alienation from the heavy-handed conformism and obedience that our post-war leaders seemed to expect of us.

I scratched my head. How could these anti-authoritarian, dope-addled draft-card-burners of 1970 become the handmaidens of the 1987 stock-market crash, the burst bubble that basically brought the world economy to its knees? (Don’t think I am high on hyperbole here, because the one-time American anti-war radical Jerry Rubin became a stock-broker “to subvert capitalism from within”, in his well-recounted quote, and no-one raised an eyebrow. But Rubin was a clown!)

In other words: The world was ripe for change at the end of the Vietnam War, but why did that change evolve into the most extreme form of corporatism in over a century? And what were the dots to be joined that led from the rejection of overweening imperial power to embrace the overweening corporate power that also shattered lives, in just 15 years?

Without doubt, the liberal democratic model that emerged from the rubble of World War Two was completely discredited by Vietnam. For example, our then prime minister, Malcolm Fraser, was reputed to be closely reading the works of libertarian philosopher Ayn Rand. And many of my colleagues had their noses in Alvin Toffler’s Future Shock and (Tom) Peters and (Robert H.) Waterman’s In Search of Excellence.

But that hardly seemed the sea-change necessary to sweep Margaret Thatcher into No. 10 Downing Street in 1979 and Ronald Reagan into the White House in 1980, setting in train what became known later as the Decade of Greed.

“Do you reckon there’s a link?” I asked my wife whose formative years at university were in the 1970s, long after mine. “Wayne Dyer,” she replied. “Who?” I asked, quite mystified. Wayne Dyer, Byron Katie and Deepak Chopra, she told me, were only the most prominent of a raft of self-help gurus whose work flooded our campuses in the 1970s, the very breeding grounds for the entrepreneurs who brought us the excesses of the 1980.

She told me that what was common to all such writers was the rediscovery and flowering of the individual Self, an idea which evolved in due course into the preeminent idea that the greatest enemy of the Self was guilt. Guilt that holds you back. Guilt that drags you down. Guilt that clutters your mind. Guilt that mires you in the past. Guilt that cripples you. Guilt, I suppose, that makes you a softie.

And here was I thinking, back in 1972, that the obvious lesson to be learned from our struggle against the Vietnam War was the need to refresh the idea of Duty, to society and country, an idea whose corrupting had dragged us into that quagmire, with a new sense of Duty breathing with the noble selflessness of the anti-war movement, a mass uprising that had brought hundreds of thousands of idealists into the streets for years on end.

I had never heard of Dyer, Katie or Chopra before, which shows how out of touch I was with what was going on beneath the surface calm of our society. (When I went to the US in 1980, I saw lapel buttons for sale with the script: “Elect JR [Ewings] for President; he’s so rich he’ll buy the [Teheran] hostages back.” How dumb was I?)

In any event, when I looked again at the images of the American anti-war protests preserved in Burns and Novick’s doco, I think I saw what the link between 1972 and 1987 might be: Unlike the demonstrations in Europe and Australasia with their masses of red flags and heavy Trotskyite presence, the American protests were political only in the limited sense of ending the army draft and pulling US troops out of the war.

As T.D. Allman, the American journalist who exposed Henry Kissinger’s secret war in Laos, told an Australian anti-war planning meeting in Sydney, he would not get up on a public stage and advocate the defeat and humiliation of the United States. That sensitivity could not be said of the majority of non-American anti-war activists listening to him that night.

The beating heart of the American anti-war movement was cultural, I believe, not political, and whatever politics it embraced they were never of the radical transformative variety.

And what we didn’t notice as well, was that while the US was being humbled in Vietnam, American popular culture was soaring to heights that would have been unthinkable, say, in an Australia of even five years before while ever British influence acted as a quasi-snobbish brake on American “adolescence” (to quote the wartime prime minister Jan Smuts of South Africa). Take a US anti-war writer like Philip Caputo who described Vietnam as “the world’s first rock ’n’ roll war” as your evidence!

Thus, it seemed to me with hindsight, that the heart of the anti-Vietnam war movement lay not in reaction to US Cold War strategy but in the personal offence that the visible obscenity of that conflict stirred in each and every American heart. It would be sad, then, to think that the salvation of that heart from the disgrace of Vietnam might have come in a guilt-free sense of Self, beguiling many into an acceptance of corporate shenanigans, with its inevitable victims just so much boring collateral damage. Roll on, bankruptcy!