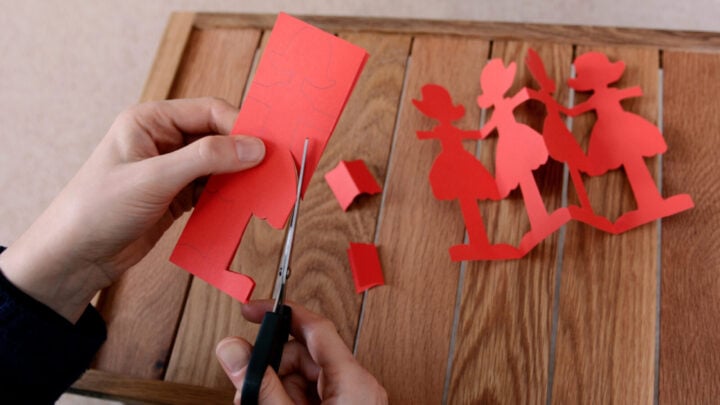 From paper dolls to scrapbooking, there was always something to do at home. Source: Getty

Long ago when we were little girls, we learned to make our own fun with various items that were found in our homes. If we were lucky, we might be given a paper doll set as a gift. The doll would be made of cardboard and modestly dressed in undies and a singlet. She would pop out of the perforated page and we would carefully cut out her clothes which were in the rest of the book. They had little tabs on them, and we could dress our dolls up in a variety of outfits. If we got bored, a little more creativity meant that we could trace around the doll template and create even more outfits for her to wear. Hours of fun.

Then, there was finger knitting or french knitting. A wooden cotton reel had four small nails hammered into the top. With scraps of wool, we would weave a long woven tail which eventually we sewed into a coil to make a sort of mat. They were useless really, but Mum tried to look impressed when we presented her with one.

And then there were the scrapbooks.  Large empty books with soft covers which we filled with scraps. Sometimes if we were lucky we got pretty little pictures in sheets that we would paste into our scrapbook. Or, we cut up Mum’s old magazines and Christmas cards to fill them up. The scraps were lovely, pretty angels, flowers, kittens, and other sentimental images which appealed to little girls.

On long winter afternoons, my sister and I would play in the hallway next to the space heater. We got our tartan slippers and pretended they were cars. We had the precursor to the Barbie doll – a stiff naked doll about six inches long with a Victory roll hairdo. Mine was brunette and my sister’s was blonde. They had high heels which were stuck on. Their breasts were very prominent and we called them the ‘Bosom’ dolls, as that was what Mum called her breasts. We made clothes out of handkerchiefs and drove them around in our slipper cars. I’m still amazed that we were allowed dolls with such adult protuberances

When really bored, we drew pictures, coloured in, played ‘Snap’ or ‘Happy families’, and often just read our books to fill in the days when it was cold. A length of elastic could be used to play ‘elastics’, and the bone knuckles from the dinner were good for ‘knuckle bones’.

When I look at the huge amount of plastic and overpackaged toys and games for children these days, I’m saddened, as I remember how it used to be. But times change, and this old Nanna has to change with it. How did you occupy yourselves when you were children? do you have fond memories?