Building sites- the playgrounds of yesteryear 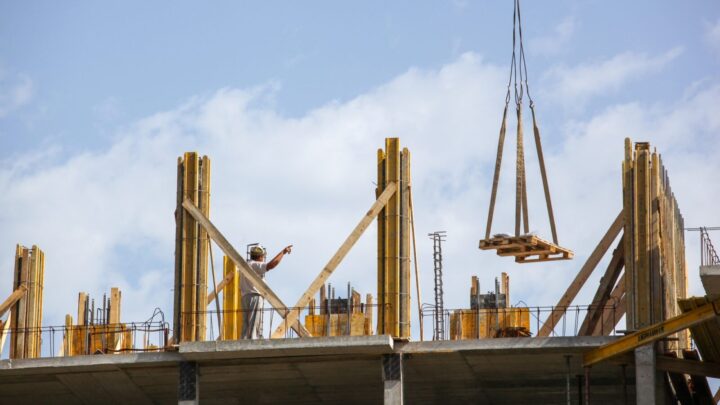 From saw dust to the porta-loo, building sites offered an abundance of entertainment of children. Source: Getty

Driving past a home building site in recent years, you could be forgiven for thinking that a high-security prison was being constructed. Metres of temporary fencing, back to base spy cameras erected on imposing mobile towers, and numerous security warning signs threatening everything short of public flogging for potential trespassers.

Of course, changing times have called for higher property security. It seems that even the precaution of literally nailing something down to deter would-be site thief who has their eye on items such as stoves, sinks, doors or even stacks of gyprock is not enough. The advent of public liability added another level where builders were in danger of being sued if an uninvited visitor to their site injured themselves or worse.

It wasn’t always like this. As a child in the 60s building sites were as inviting a playground as any of the swings and slides in the local park and living in a new estate provided an everchanging source of adventure.

Queensland homes in the 60s and early 70s were predominantly highest in a budget attempt to mimic the traditional old Queenslanders. Floor joists prior to floorboards being laid tested our balance and gymnast skills. We never ventured up onto the roof structure. The potential two-metre drop to the ground from the first floor was enough of a thrill for us.

It seemed like builders of the time swilled an inordinate amount of soft drinks. Worksites were always littered with empty bottles, and this was an economic boon for kids who could gather them up and return them to the local milk bar for the 5 cents bottle refund.

In those times two empties paid for a Chokito chocolate bar or a Sunnyboy or Glug ice-block. The shop owners weren’t that keen on just handing over the cash without a sale. My wife tells me that she and her friend had a business plan based on the bottles whereby they would use a K-tel bottle cutter to create beautiful clear and amber coloured drinking glasses and vases. If only The Apprentice or Shark Tank had been around they would have made the big times.

On a Friday the soft drink bottles were replaced with numerous beer bottles. One of my mates thought it would be a good idea to pee in one of the bottles on the off chance the builders would return the following week and think that they had missed out on drinking a full bottle of beer. We never had evidence that they fell for it, but I’m guessing they were a bit more in the know about what beer looked and smelt like than an 8-year-old. All we had to go by was that we’d heard from our parents that some builders liked to “get on the piss.”

Beyond the security fences of present-day building sites, there is a secondary layer of defence usually made of scraps of old reinforcing wire. This enclosure corals surplus building materials and scraps. Again, probably a workplace health and safety issue.

The sites of yesteryear weren’t quite so tidy. Numerous lengths of timber, pipe, and scraps of roofing spread around the site supplied construction basics for the current cubby house that was usually secreted away on a nearby uncleared block. Even in my early teens, a building site provided me with broken bath tiles for the obligatory tiled coffee table created in woodwork class.

There were always various piles of stuff around the site. The most unusual was a pile of sawdust left over from the sanding of the timber floors. This provided an interesting science experiment about combustion.

When you lit one side of the pile with a match, the small flame slowly spread from one side of the pile to another. The site bricklayers helped out by supplying a pile of brickies loam which doubled as a sandpit for a least a few weeks. You just had to be mindful of nails and other sharp objects along with the local cat’s inclination to use it as a toilet.

Speaking of toilets, the building site porta-loo held some fascination. These weren’t the flash chemical assisted versions complete with washbasin loos we see today. Essentially, they were a small tin box with a heavy metal bucket under a less than inviting half-rotted seat. Some of the brave ones among us tried them out, but there was always the fear that your mates might start rocking it back and forth with you inside. Not a pleasant experience.

Finally, building sites were a great venue for games of hide and seek. Half built rooms, piles of junk, trenches for the rainwater and septic tank pipes, underfloor nooks and crannies, and for the really adventurous, the aforementioned porta-loo all helped provide us with many hiding places.

Of course, in these more aware times, we would never suggest any of these antics to our children and would probably face some form of the official investigation if we did. But in the context of the times when it was okay to take a five-mile ride in the back of your dad’s ute on the way to the tip, our building playground seemed pretty safe and normal.