A history of takeaway 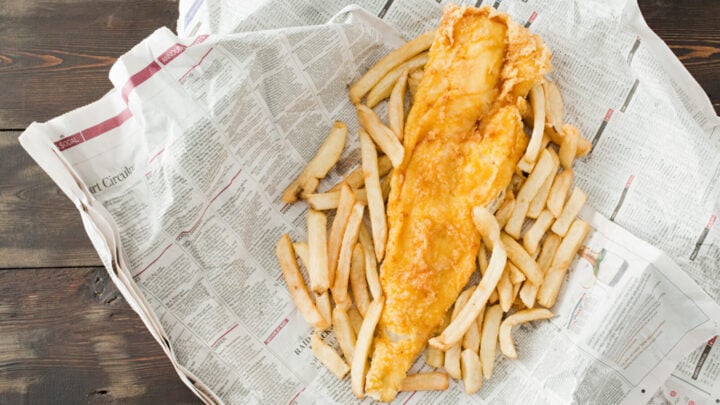 Because food is linked with our very existence, most of us have a history of takeaway food that runs parallel to our memories of our lives. Source: Getty

Because food is linked with our very existence, most of us have a history of takeaway food that runs parallel to our memories of our lives.

My takeaway with history began with my earliest memory as a two-year-old sitting on the steps of the Caulfield Maternity Hospital, with my Dad, the night my little sister came into the world. I was clutching my first hamburger. I guess it was a celebratory burger. It took two hands to handle the whopper of a burger (a slogan Hungry Jacks would embrace a decade later much to the amusement of teenage boys) as the beetroot juice ran down my little arms. A year later at the Caulfield race track, I experienced my first Dagwood dog while we were waiting for Zig and Zag (the rock star equivalent of The Wiggles in the 60s) to emerge from the sky in a helicopter. It was like a hot dog clothed in a donut.

Next up came the Chinese takeaway. Living in Frankston in the 60s, a monthly treat was the trek to the Chinese restaurant on Wells Street. Dad would march in with two saucepans and a Tupperware container. A saucepan each for the chicken chow mein and the fried rice, and the Tupperware for the dim sims. To this day, I don’t know if the saucepan thing was a Melbourne thing or just an Evans family thing, but I do know that it tasted good.

Fish and chips weren’t just a favourite reserved for a trip to the beach. Wrapped in yesterday’s newspaper, the hot steamy vapour of ink and grease set your taste buds up for a treat of flake, chips, and if you were lucky, a scallop or two. Thursday night grocery shopping with Mum was sometimes followed by a stop at the fish and chip shop for an easy tea. When we moved to Queensland, Dad ordered his usual from our new fish and chip shop and was disappointed to find our beloved scallops were replaced with a battered slice of gooey potato. We then knew to ask for sea scallops, but they rarely had the roe attached like in Victoria.

During our many family trips between Brisbane and Melbourne, my go-to takeaway from the roadhouses along the way was the often-maligned Chiko Roll. Detractors compared it mistakenly to a spring roll. This 20 cent feast of meat, cabbage and carrots came in a bag proudly proclaiming that they’d been around since 1951. The same detractors pointed to the chewiness of the roll as proof that some of them had indeed been around since then. Of course, they missed the point that the humble Chico Roll inventor, Frank McEncroe, designed the outer layer to be more rugged after seeing spectators at football and cricket matches struggling to eat soggy meat pies with one hand while juggling a tinny with the other.

As a kid, one dream of mine was a bucket of chicken from the colonel. The snack packs with the gooey gravy and potato concoction, and the very thoughtful moist towelette, were alright, but that giant bucket on top of the roof was just a tease. With the colonel’s innovation of the drive-thru, you didn’t even need to leave your car.

In my teens in the 70s, I revisited my love of hamburgers. The corporate Jacks and Macs burgers were big time by then, but for me, nothing could beat the personalised delights from the local burger joint. After a day of biking and then later trail bike riding, a common hamburger with the works hit the spot. Some of today’s burgers have forgotten their place in the food chain and attempted to raise their social status. Wagyu beef burgers with fermented beetroot grown in the crypt of an ancient monastery topped with little flags on toothpicks sticking out of them. They aren’t technically even takeaway, they’re sold in restaurants with table service, imported craft beers, and served with knives and forks no less.

The advent of vouchers and shopper dockets in the mid-eighties continued the ramping up of Australia’s love of takeaway. Many a night after stacking shelves until 11 pm at the local supermarket, I’d surprise my wife with a rooster roll or a whopper (neither being a euphemism) purchased with a two for one voucher.
For many families, take-away eventually graduated from a once-a-week treat to an any day of the week staple. The pizza wars of the nineties and noughties sped this up by offering $3 pizzas which were hard to resist.

Not having been directly involved with the takeaway industry, I’m not well versed in council requirements for kitchen ventilation, but I’m convinced the corporate chicken, pizza, and burger chains have massive exhaust fans designed to pump desirable food smells into the atmosphere to attract you in as you drive by. Just a theory. Nothing I can prove. I need an industry insider to confirm.

Now the sausage sizzle fancied by big hardware chains and polling booths is a bit of a grey area as a takeaway. Bread, sausage, sauce, and possibly onions served on a napkin, not in a bag, to me, is more like you’ve jumped over your neighbour’s fence and nicked a snag off their BBQ.

Finally, the humble pie can’t be forgotten. Yes, there are some variations of added potato, peas, and mushrooms, but your basic meat pie has been a takeaway staple forever and one of my favourites. I seriously considered doing a bakery apprenticeship in my teens just so I could have 24/7 access to the secrets of a good meat pie. Meat pies also come with the possible thrill of having scorching meat and gravy ending up in your lap. I’m sure they keep the burn wards busy. Perhaps not the ideal takeaway if you are planning on driving and eating, as my mate discovered when he nearly rear-ended another car after the hot pie goodness tried to cook his manhood.

Takeaway has gone up a notch lately with order by phone apps and home deliveries by car and bike to be seen everywhere. Our area has even recently introduced drone deliveries. So, is it really takeaway if someone else is doing the ‘taking’ for you? The latest development in takeaway is the DIY meal, where a box of fresh ingredients and instructions is dropped at your door. Sort of like ‘flat pack’ takeaway. Are we getting duped into creating our own takeaway at home or have people just realised that they actually have several thousand dollars worth of neglected Euro appliances sitting in the kitchens at home?