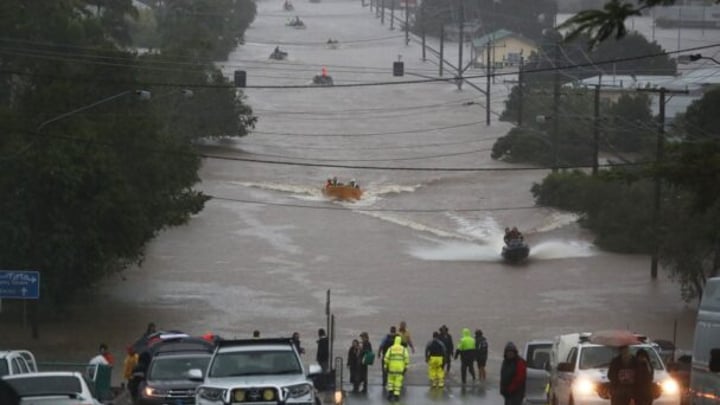 PHOTO OF BOATS IN THE MAIN STREET OF LISMORE - 2022 Source: Supplied

Rose-coloured glasses may see chests expanding with ANZAC pride however, many of us are damned if we can grasp any silver-lined prospects following these most tragic of circumstances, in the Lismore / Ballina areas.

“The Little Ships of Dunkirk were about 850 private boats that sailed from Ramsgate in England to Dunkirk in northern France between May 26 and June 4, 1940 as part of Operation Dynamo, helping to rescue more than 336,000 British, French, and other Allied soldiers who were trapped on the beaches at Dunkirk during the Second World War.”

In a remarkable response to the community’s flood emergencies, young men utilised every type of water vessel they could find in Lismore in the early early hours of Monday, February 28, 2022. Lismore’s main street became a watery thoroughfare of tinnies, canoes, jet skis, surfboards, anything that may help save a life, as house after inundated house was searched for survivors, by inexperienced, adrenalin driven, untrained civilians. Jubilation as many household members wept with sheer relief after hours, some after days. of being ‘stuck’ on roofs, eves, window
ledges or grasping onto branches and trees. Survivors told of the horror of listening to multiple anguished, gut-wrenching, pleas for help, but knowing they could do nothing. As dawn approached, the pleas stopped but the young men of Lismore just kept going.

Using Dunkirk as our template of lessons learned, or NOT learned, I fear there will be a heavy, future, mental price to pay for such bravery. I fear being ‘thrown in at the deep end’ may see many heroes sink, not swim. Rose-coloured glasses may see chests expanding with ANZAC pride however, many of us are damned if we can grasp any silver-lined prospects following these most tragic of circumstances, in the Lismore Ballina areas. Over 80 years apart we must ask the same questions over again, where, in God’s name, were the authorities?

Over 80 years apart we must ask the same questions over again, where, in God's name, were the authorities?