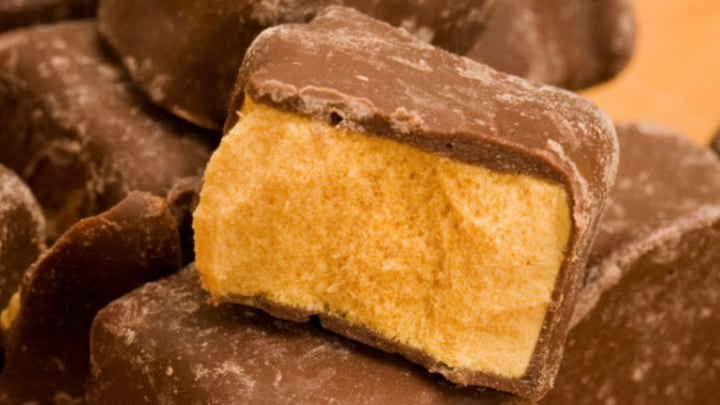 It’s been a tough few years for Australian manufacturing with Holden and Ford factories closing up shop and some of our biggest brands being sold off to foreign buyers, but South Australian confectionary company Menz has delivered some much-needed good news.

On Wednesday the company announced it’s started production of Violet Crumble after bringing the iconic chocolate bar back into Aussie hands earlier this year.

Back in January, Robern Menz signed an agreement with Nestlé to acquire the Violet Crumble brand, putting the delicious treat back in Aussie operations for the first time in 46 years, after it was purchased by British company Rowntree in the 1970s, and later bought by Nestle in 1989.

Read more: Violet crumble back in Aussie hands thanks to SA buyer

Now celebrations can really begin as the company starts production of the chocolatey treat at Glynde, in Adelaide’s east, following a $4 million refit and extension of the factory. And fear not, Robern Menz has ensured consumers won’t notice any difference in taste, with the century-old recipe and purple and gold packaging remaining the same.

“The number one priority is to make sure that recipe is unchanged since 1913, that Australians have known and grown to love,” Phil Sims, Robern Menz CEO, told Nine News.

As well as putting an Aussie-made product back on supermarket shelves, the company has also provided up to 30 new jobs at the Menz factories in SA.

Unfortunately, the same can not be said for a number of other Aussie brands and factories, which closed up shop in Australia over the last couple of years. Ford was the first to go in October 2016, after 91 years in the industry, with Holden following in its footsteps and shutting the doors for the final time one year later.

The closure of Holden took a massive toll on Australia’s workforce, leaving about 944 people out of work, while 600 jobs lost at Ford.

However, car manufacturing companies aren’t the only ones who have been pushed out of Australia with Dick Smith forced into closure, and popular retail stores Millers, Katies, City Chic and Rivers shutting hundreds of shops across the country.

The end of Dick Smith was one of the most publicised closures, with the last store shutting its doors in May of 2016. According to Business Insider Australia, over 2,400 staff lost their jobs across the 301 stores in Australia as a result of Dick Smith’s demise.

How you feel about Violet Crumble production beginning in Adelaide? Are you glad to see the brand back in Aussie hands?