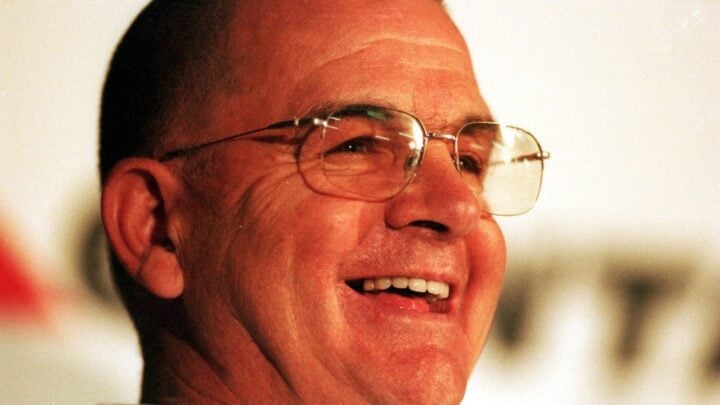 The swimming giant who is known for coaching the golden era of Australian swimming, has died. Source: Getty.

Former Australian swimming head coach Don Talbot has died at the age of 87. The legendary coach was best known for taking Australia to the top of the global swimming charts amid the nation’s peak period in the pool from the 1990s to early 2000s.

Talbot, who began coaching in 1956, was responsible for the historic medal sweep at the 2000 Sydney Olympics where Australia’s national squad returned the best results in almost three decades. The winnings included five gold medals, nine silver and three bronze.

The massive win neared the end of his coaching career as he retired the following year after the world championships in Fukuoka, Japan. However, the 2000 Olympics marked his second time sitting at the head of the team after he also held the reigns between 1964 and 1972 when he moved to Canada.

His talent for coaching was also spread internationally when he coached the US team for two years in the lead up to the 1980 Moscow Olympics which were then boycotted by America and other nations. He was then appointed the inaugural director of the Australian Institute of Sport before he snagged the role as Australian head coach for the national squad in 1989.

Tributes on Twitter flowed in for the swimming legend with one writing: “Along with Forbes Carlile, he led Australia’s ascent to the top of the swimming world in the 2nd half of the 20th century. RIP Don Talbot.”

Another wrote: “Very sad to hear about Don Talbot’s passing today. He was a powerful force in Australian swimming. He powered the Australians to the forefront of world swimming and he took many of us along for an exhilarating ride. Thanks for your service and incredible memories, Don.”

Meanwhile, Tim Kelly, who interviewed Talbot for the last time, remembered the swimming giant as the ultimate supporter of Australian sports: “Had the pleasure of hosting Don Talbot for one last interview at the AIS. He broke down in tears when describing his passion for Australian sport. #RIPDON”.

Do you remember Don Talbot?