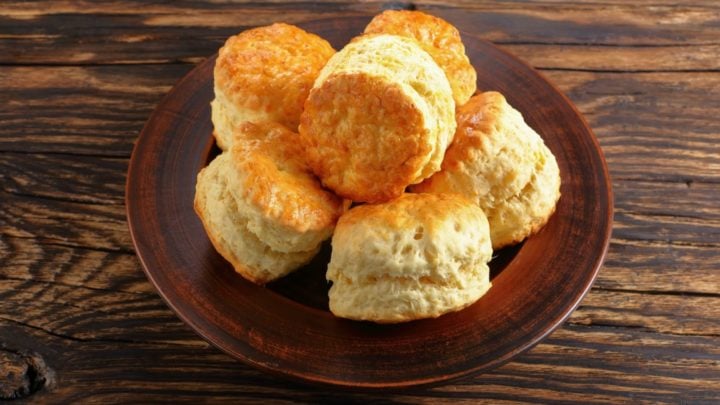 The family favourite was made with just three ingredients. Source: Getty.

No milk, eggs or butter? No problem! A 92-year-old Australian woman has made headlines across the country after she shared a simple recipe for scones.

Muriel Halsted’s perfect scone recipe featured in an ABC baking video, which has had more than 5 million views since it was published in early April. In the video, Muriel, who’s a member of the Australian Country Women’s Association, explained the family favourite was made with just three ingredients — flour, cold cream and lemonade.

To get started, Muriel says you need to measure out five cups of self-raising flour, then sift three times before adding a pinch of salt. Fold in 300ml of cold cream, then add 300ml of lemonade.

She says to keep folding the mixture together until the flour is all mixed in. Once you’ve done this, put onto a floured board, cut into your size choice and brush with a little bit of milk. Then pop them in the oven for 10 minutes — it’s that easy! Muriel says don’t forget to set your oven to 220 degrees before your start.

Many people praised the woman for her tasty scone hack, with one commenting: “Making another batch this weekend!” Another commented: “This is exactly how grandma used to make them too.” While a third said: “What a legend! Time to get my bake on!!”

If you’re looking for a little inspiration in the kitchen, an American chef recently shared an easy recipe for homemade bread.

“Bread shortage? This is the easiest kind of bread you can make,” Brandon Johnson wrote on Facebook. “Costs pennies and can get you through these strange times, my family lived off these when the pickings were slim.”

“Mix dry ingredients together and add most water, mix and add water until it has the consistency of tacky pizza dough,” he said.

Once you’ve done this, knead the mix for a few minutes, and then let it rest in a greased bowl for somewhere between 30 and 60 minutes. Then, divide it into six pieces and roll it out on a floured surface until it has the thickness of tortillas.

“Cook until [there are] golden brown spots and flip, cooking until done,” he said. “They can be made ahead and kept under a floured towel or frozen for later use. Hope this helps.”

Do you enjoy eating scones?