Kyrgios one match away from Wimbledon win as Nadal withdraws 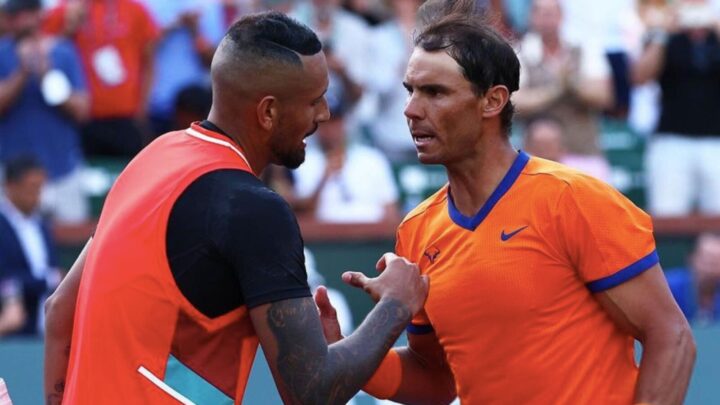 Nadal out of Wimbledon with abdominal injury, Kyrgios into final. Source: Instagram @k1ngkyrg1os

All eyes are once again on Nick Kygrios after world No. 4 tennis star Rafael Nadal was forced to withdraw from his Wimbledon semi-final after failing to recover from an abdominal injury he sustained in his quarterfinal victory against Taylor Fritz.

Nadal’s withdrawal from Wimbledon marks the end of the Spanish tennis player’s dream of a calendar grand slam.

“I have to pull out of the tournament as I have been suffering with pain in abdominal,” said the 36-year-old, the holder of a men’s record 22 grand slam singles titles.

“I knew something was not okay there, [and] it’s confirmed: I have a tear in the muscle in the abdomen.

“I can’t imagine winning two matches with this [pain]. For me, the most important thing is happiness rather than the title even though everyone knows how much effort I put into this as I can’t risk being out of the sport for two to three months.

The All England Lawn Tennis Club would like to extend our sympathies to @RafaelNadal #Wimbledon pic.twitter.com/EpLvyyQEKV

Nadal’s exit also ends his chance of becoming the first men’s player to win the Grand Salm since Rod Laver in 1969- but his departure opens the door of opportunity for both Kyrgios and Nadal’s longtime rival Novak Djokovic.

Kyrgios has his eyes set to become the first Australian men’s singles champion.

When speaking of making it through the semi-final stage, Kyrgios admitted: “I just never thought I would be at the semifinal of a grand slam, I thought my ship had sailed.”

“Honestly, I didn’t go about things great earlier in my career and may have wasted that little window.”

Now, he’s been served the opportunity of a lifetime, at just 27 years old, to go into the Wimbledon finals without having to endure what would have likely been a punishing match with the Spanish legend.

Kyrgios has also left his mark as the first player in the open era to reach a grand slam final with a walkover and the first Australian to play for a major title since Mark Philippoussis in 2003.

The escalating developments in Kyrgios’s path to Wimbledon glory come after a scandalous few days for the Australian.

After his first-round win on June 28, Kyrgios shocked the tennis world with his behaviour, living up to his self-styled role as the villain on the court.

Kyrgios fought with the umpire, spectators and line judge, and admitted to spitting at a spectator saying he was fed up with the alleged verbal abuse and racial taunts directly aimed at him throughout the match.

The next day, following his annihilation of Filip Krajinovic, the tennis star flagged the end of his career.

Kyrgios claimed he believed he played some of the best tennis of his career but declared that he only sees himself in the sport for another two to three years, saying that he wanted to settle down and start a family.

For now, Kyrgios still intends on competing in more games and is citing his match with Krajinovic as a reminder of how serious he is about the sport.

“I just wanted to remind everyone that I’m pretty good,” he said with a straight face during his on-court interview.

“I couldn’t have played better.”

He later added: “I know what I bring to the sport. I’m one of the most important people in the sport.

“Do you want to speak about that? Nothing to investigate there because it’s just factual.”