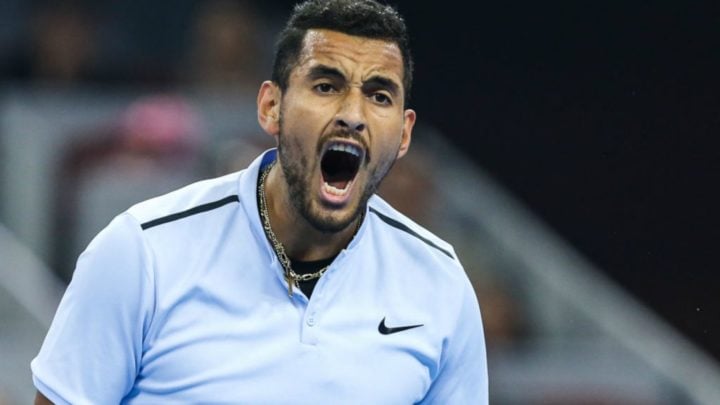 Controversial tennis star Nick Kyrgios has drunkenly criticised some of tennis’ biggest names in a wildly entertaining Instagram rant with British tennis player Andy Murray. In what was meant to be a casual chat between two famous tennis stars about old matches and a potential future doubles partnership quickly turned into a slam fest led by none other than Kyrgios.

The 25-year-old didn’t hold back revealing he thought Murray was better than top-ranked tennis star Novak Djokovic. “I said that to you many times. I think you are better than Djokovic,” Kyrgios said. “Djokovic was playing dodgeball on my serve and you were slapping it for a winner. He was trying to dodge it, you were on it like a light.”

He then went on to slam some of Europe’s top players after Murray asked Kyrigios why he got excited playing in team events like the Laver Cup than for grand slams: “Let’s be honest, [Stefanos] Tsitsipas and [Alexander] Zverev hate each other, then they are besties all of a sudden. Someone like [Dominic] Thiem … I mean I like to get good vibes from trying a new cocktail … he’d prefer to watch paint dry.”

Kyrigios continued: “Team World, that is what we are all about man, if you came over to Team World we would win. We don’t care about Nadal, Djokovic and Feds, man. We all love you. Ordinary people like us love you.”

It didn’t take long before tennis fans jumped on social media, with one writing: “I want someone to love me as much as Nick Kyrgios loves Andy Murray.” Another added: “Andy Murray’s Instagram live with a drunk Nick Kyrgios just now was everything!”

While a third wrote: “Still laughing. @NickKyrgios talking about how he loves Muzza [Murray] as he gets on with people from England they are similar to Australians, the wine made him forget @andy_murray is Scottish.” Another added: “If this is @NickKyrgios behaving, I wonder what him misbehaving is! @andy_murray just told Nick that one time he will play doubles with him.”

Kyrgios is no stranger to controversy. Last year, the tennis player was fined $US113,000 ($AU167,000) after he was seen spitting and swearing at a chair umpire at the game’s conclusion.
CelebrityNewsMediaLifestyleSport
Share: