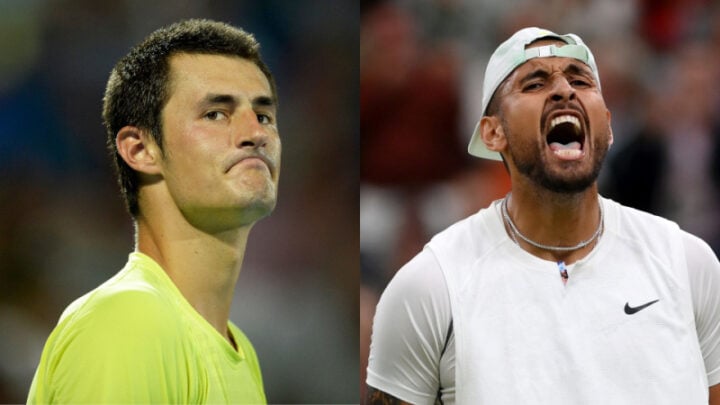 The long-running and bitter feud between tennis stars Nick Kyrgios and Bernard Tomic appears to have reignited after the two compatriots traded barbs recently.

Despite controversy both on and off the court, Kyrgios is on a career-high lately after making it to the Wimbledon finals and securing an impressive victory against defending champion Daniil Medvedev in the US Open, in what sports commentators labeled the “best match of his career”.

Whereas, Tomic began the year with a loss in the Australian Open qualifying round and has since fallen to number 660 in the rankings while struggling to move past the opening rounds in this season’s tournaments. Despite his struggles, Tomic recently secured a victory in the M15 Cancun tournament on September 12 and made it to the semi-finals.

Those expecting any sympathy from Kyrgios regarding Tomic’s difficulty in rebuilding his career were left disappointed after the 27-year-old held little back in his harsh criticism of his former friend.

During a recent Instagram Live video, Kyrgios responded to a fan who asked whether an exhibition match between himself and Tomic was on the cards.

“TBH (to be honest), don’t think I wanna make him relevant anymore. I’m not gonna bother with someone 800 in the world. But all the best,” Kyrgios replied.

Tomic wasted no time in firing back against the sledge, quickly serving up his own shot at Djokovic.

“Just a matter of time before I see you Nicky boy. #obsessed #scared,” he replied.

In what appeared to be another warning to Djokovic, Tomic stated that it would only be a matter of time before he is ranked in the top 100 again.

“Momentum’s coming my way. Not long now. Done it before. Will do it again.”

Tomic isn’t the only one taking a very public swipe at Kyrgios, following the world No. 20’s five-set quarterfinal loss to Karen Khachanov at the US Open on September 7, the tennis community was left fuming following Kyrgios’ on-court meltdown.

In an almost four-hour match, Khachanov secured a 7-5 4-6 7-5 6-7(3) 6-4 victory over Kyrgios, dashing the 27-year-old’s chances of becoming the first Australians to reach the semi-final since Lleyton Hewitt 17 years ago.

Kyrgios’ composed and contemplative demeanour in his post-match interview, where he reflected on his “heartbreaking” loss, stood in stark contrast to his on-court tantrum following his loss to Khachanov. After congratulating his opponent, Kyrgios was spotted smashing two tennis racquets into the court in wild scenes that left the fans and the tennis community shocked.

Former Australia professional tennis player and current sports broadcaster Todd Woodbridge was among the first to call out Kyrgios for his pot-match tantrum.

Despite the considerable condemnation that followed, tennis great Rod Laver recently revealed that despite his controversial antics, Kyrgios has finally earnt his spot at the top.

“Kyrgios has all the ability in the world, every shot that you could wish to make,” Laver told the Daily Telegraph.

“He’s probably one of the biggest servers in the game. He’s accurate, he can play under pressure.

“I was thrilled when he reached the final, but he didn’t think he could win Wimbledon. In my mind, I said, ‘Hey, put in your best performance. You may surprise yourself.’

“A month or two later, I said, ‘You can win some of these matches. Why don’t you apply yourself, man?’”