Shopping through the years: From enticing window displays, to department store cafeterias 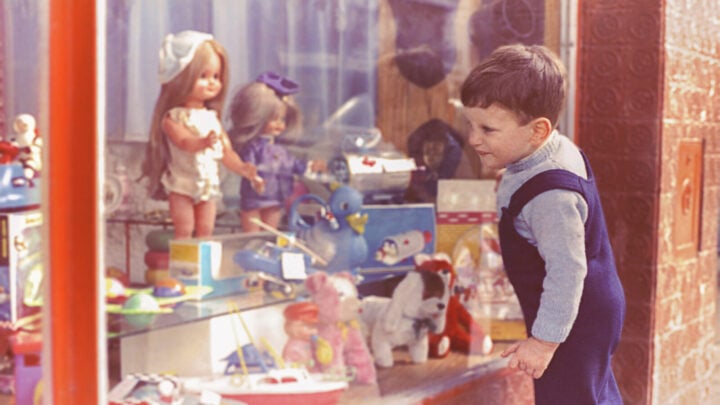 How we shop has seen many transformations over the past 60 years. Recent advances in online shopping away from bricks and mortar are obvious, but there have been many other changes.

A popular family outing of yesteryear was window shopping. Families would promenade up and down the strip malls, pausing at windows of interest.

Kids would be glued to the Tim the Toyman window, hoping to see the latest Barbie doll or Meccano set, Mum would be enthralled by the latest planetary action Kenwood food mixer or summer frock, and Dad would fantasise about how his latest Tom Jones LP record would sound on a new HMV Stereogram.

Window shopping was particularly useful in the lead up to Christmas or a birthday, when the length of time you stared at an item through the window could be used to provide a not-so-subtle hint of potential present preferences.

With the extension of shopping hours, at some times of the year until midnight and beyond, the tradition of looking through a shop window has been replaced with full access to shops.

Lately, a new version of window shopping involving stolen cars and smashed plate glass windows has emerged, but it’s not really in the spirit of the window shopping of earlier times.

Another deterrent to window shopping in the new millennium is the boring nature of most shop windows now.

Rather than regularly updating to a new eye-catching display of the latest fashion, toy, or must have appliance, many shops merely change the sale banner they have plastered across the window. This has been prompted by an era where sales are no longer special and something to look forward to, given that they occur all year round.

The Coles and Woolworths variety stores of yesteryear were a unique take on the more staid and upmarket department stores. Set out like a supermarket but with multiple sales counters behind a range of sloping display fixtures (almost like current fruit shop displays). Each display was its own department and you could buy a range of inexpensive goods; little wooden pop guns, fishing tackle, kitchen utensils, confectionery (bars and unwrapped lollies sold by the ounce), toiletries, and more.

In the late 60s and early 70s, Kmart and later, Big W, took the variety store to the next level.

Early Kmarts stocked white goods, hardware, timber, rifles, and ammunition along with the traditional variety items. There really wasn’t much that they didn’t sell.

Ironically, although these stores originally took a lot of the custom from smaller specialised shops, the arrival of big box specialty hardware, electrical, and sporting stores in the new millennium, forced the Kmart and Big W type stores to refocus on simpler and cheaper variety fair.

Butcher and fruit shops are less prominent in shopping centres having often been replaced by supermarket meat and produce sections.

I remember going to the butcher with Mum and trying to work out why the floor was always covered in sawdust until I noticed a sign that read “No expectorating on this premises.” Aha! After asking Mum what expectorating meant, I figured out that the sawdust was to make it easier to clean up the spit off the floor from those customers who couldn’t read.

Some of the fruit shops and butchers of yesteryear reminded me of a circus, with the owner (ringleader) yelling out the range of specials and how juicy his products were. I challenge a supermarket meat or fruit and vege manager to do that now without customers scurrying away in fear.

Getting to the shops wasn’t always a matter of jumping in the family car. Many families only had one car, which the male breadwinner often used to get to work.

In this case, it wasn’t just a matter of Dad helping out with the shopping outside of his work hours, as shop opening times were far more limited than now. Most shops closed at 5 pm during the week, at midday on Saturdays, and they were definitely not open on Sunday.

In the late 70s, when late night trading came to Thursday nights in Brisbane, it was very exciting. It felt quite naughty pushing a shopping trolley around at the ungodly hour of 7 o’clock.

As newlyweds, Thursday night shopping became our pseudo date night, and it was also a money saver as our romantic dinner was usually supplied by the supermarket for free. You see, Thursday night was when a myriad of new product taste test and sample booths popped up for us to try. A spiced sausage on a toothpick here, a few cheese on crackers there, and followed up with a little cup of yoghurt for dessert, we had our night’s meal all sewn up.

The original stand alone major department stores were quick to realise that keeping customers in their stores was the obvious key to increased sales, so early on, the Myers, David Jones, and MacDonald and Easts of the times introduced cafeterias to their stores so that customers wouldn’t have to leave the store to eat.

Unfortunately, the advent of shopping malls with numerous built-in cafes and take-away outlets led to the demise of department store cafeterias.

Even though they were essentially set up like an army or prison mess, albeit with lots of chrome fittings, there was something special when Mum said we could have lunch at the cafeteria; especially if they had an ice-creamery or soda fountain section. Bliss.

Prior to the introduction of barcode scanning in the 1980s, each supermarket item had its own price sticker that had to be changed whenever the product was on sale.

It wasn’t unusual to see layers of price stickers on slow-moving items. Jack the Slasher supermarkets had the novel idea of supplying customers with a pen so they could write their own price on each item. Some customers even copied the price correctly from the one shown on the shelf.

Scanning eliminated the whole idea of individual pricing. For a while, I was part of a de-stickering flying squad whose job was to go into a supermarket after hours to strip price stickers from the thousands of items in the store prior to its reopening as a price scanning store the next day. Fun times.

Beyond the self-serve checkouts of recent years, some supermarkets are now trialling checkout-less options where you scan each item as you walk around the shop, show a QR code from your phone on the way out for payment, and you are on your way.

In a back to the future move, supermarkets will soon be transitioning away from plastic bags to paper again. You know, the ones that don’t like frozen goods very much.

Finally, children of today are missing out on one of the great pleasures of shopping centres: the playground.

These were elaborate structures with four-metre high slippery slides, ball pits, and a wide range of swings, roundabouts, and even flying foxes. My favourite was a salute to the space age of the 60s, a giant metal rocket. This welded construction stood at about three stories high, with numerous access ladders winding up through its core.

These playgrounds were unsupervised and without a safety warning or shoes off sign in sight.

Because of new age safety concerns, as well as the fact that these installations took up a lot of potential retail space, they were gradually replaced with socks only, plastic piped, and safety netted structures that would fit in the average living room.

As kids, we’d happily play in the old versions for hours, whereas the new sanitised variety might hold a child’s attention for ten minutes, but then I suppose that allows more time for the current generation’s focus on retail therapy over physical activity.