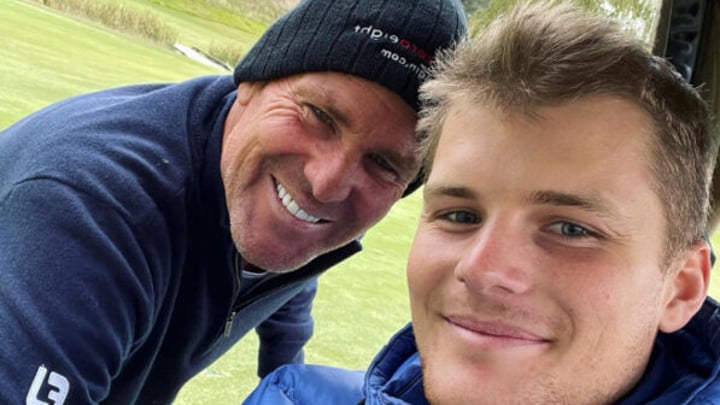 After posting the insightful message, Jackson was inundated with messages of praise and support. Source: Instagram/ @jacksonwarne18

By his own admission, Jackson Warne “could’ve easily gone downhill” following the sudden death of his cricket legend father Shane Warne in March this year but in a recent inspirational message, the 23-year-old has spoken of how he has coped with the “trauma”.

Taking to Instagram, Jackson detailed how he has coped with the loss of his father while thanking all those who have supported him through the difficult time.

“This year I could’ve easily gone downhill,” he wrote.

“I could’ve drank a lot of alcohol, gambled too much, quit the gym, ate shit food and not socialise. Be miserable.

After posting the insightful message, Jackson was inundated with messages of praise and support.

“Love you so proud of you and every day,” Jackson’s sister, Brooke Warne wrote.

“This was so heartwarming to read! Go Jacko! Everyone around you is so proud of you, I hope you’re just as proud of yourself,” another wrote.

“Great job mate you have definitely picked the right path you dad will always be super proud of you.”

“Your parents must be very proud ..most of you must be proud of yourself… keep up the great work… your Dad will be smiling down on you… Your Dad was not prefect … but he owned his mistakes.. & wanted to be a better man.. what a role model you had.”

Shane Warne, died of a suspected heart attack, age 52 while enjoying a holiday on the island of Koh Samui in Thailand on March 4, 2022.

It is said by many that Warne revolutionised cricket with his mastery of the leg spin, which, back in 1994, many cricket followers had come to regard as a dying art due to its immense difficulty of execution.