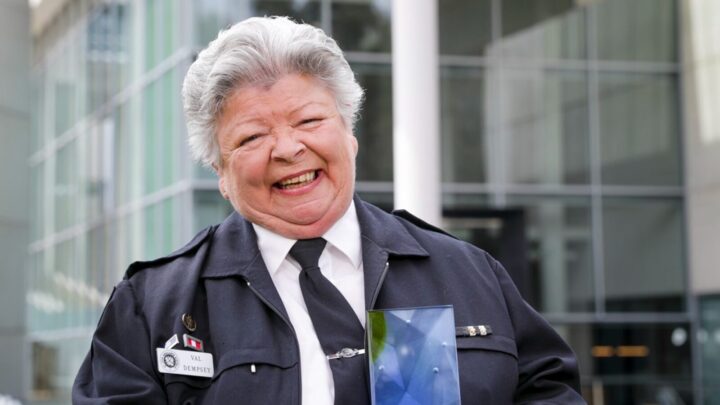 Val Dempsey will travel to London as one of a small group representing Australia at Queen Elizabeth's funeral. Source: Twitter @ABarrMLA

Queen Elizabeth II’s state funeral on Monday, September 19, is set to be one of the most historical occasions of the century.

Though Her Majesty’s guest list has not yet been made public, it has been reported that Australia’s very own Senior Australian of the Year, Val Dempsey aka “Aunty Val”, has received the royal invitation.

While millions of people around the world will be tuning in to the event from the comforts of their homes, Aunty Val will be joining over 500 world leaders, royals, and public figures who will make their way to London to bid farewell to Britain’s longest-reigning Monarch.

Speaking to local Canberra news publication Riotact, the 71-year-old St John Ambulance volunteer admitted she was left shocked to be among those invited to the Queen’s funeral.

“I was at a family birthday party out in the bush at a local winery when I received a call from the Prime Minister’s office, asking me to call them back as a matter of urgency,” she said.

“I was told that the Prime Minister is cordially inviting a number of people to come to the funeral on behalf of Australia.

“I was contacted the next day to confirm and goodness gracious here we are!

“To be a part of Her Majesty’s realm, her national family, to be recognised by Her Majesty as a member of her sovereign order, I do feel so completely and utterly humbled.”

The Senior Australian of the Year will also be accompanied by nine other “everyday Australians” who made meaningful contributions to the nation.

At the Palace’s invitation, 10 Australians who have made extraordinary contributions to their communities will attend the funeral of Queen Elizabeth II alongside the Prime Minister and Governor-General on September 19.

Here’s more about who they are:

Aunty Val and fellow Australians of the Year recipients Alcott and Whan previously had the honour of meeting the Queen via  Zoom call ahead of her Platinum Jubilee celebrations.

During the call, the chatty Queen showed off her cheeky sense of humour and remarked on “splendid” it was to be able to meet with the recipients despite the long distance.

Recalling the video chat, Aunty Val tells Today she was “just so completely in the moment” with the Queen.

“She asked some lovely questions – She was so switched-on, so engaged and I must say very witty and very chatty,” she said.

Aunty Val praised Her Majesty for her “service before self” and is looking forward to farewelling the late Monarch and welcoming the new King Charles III.