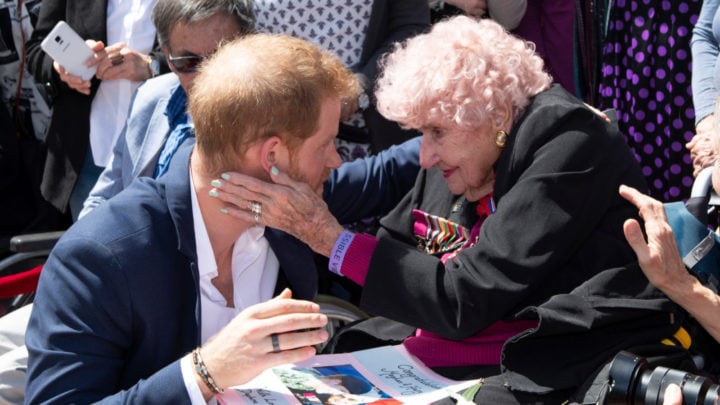 War widow Daphne Dunne received the ultimate gift on Friday with a special message from her favourite young royal on her 99th birthday.

The royal fan, who was made famous for stealing a few kisses from Prince Harry during his visits Down Under over the years, was surprised in the best of ways this week when she received a letter from the 34-year-old.

During an episode of the Today show on Friday morning, Daphne was presented with the note, written especially for her by the Duke and Duchess of Sussex.

Sitting upright in her hospital bed, the widow appeared pleased to hear Harry had reached out to her after claiming “he wouldn’t even think of it [her birthday]”.

War widow Daphne Dunne has made headlines across the world for being Prince Harry's favourite Aussie! Today, she's turning 99, and you'll never guess who sent her a birthday card… 😍 #9Today pic.twitter.com/JZNkOhRoyv

The young royals sent their “warmest wishes” to their favourite Aussie, who Meghan had the privilege of meeting for the first time during her tour of Australia last year.

“Dear Daphne, my wife and I send our warmest wishes to you on the occasion of your 99th birthday on Friday,” the letter from Harry began.

Speaking on the morning program on Friday, Daphne’s daughter Michelle Haywood explained a friend had contacted Harry via email to inform him of the widow’s birthday and received a reply overnight. The doting daughter said they were “so excited” he had reached out and they “all got goosebumps”.

“Really I think Harry and Meghan have got mum through this terrible illness she’s had,” Michelle said. “She’s still very unwell… and I think the card will be the thing that gets her through.”

Daphne, who famously stole the prince’s heart when they first met four years ago, managed to nab her third kiss from her beloved royal last year. The war widow previously met Harry when he was in Australia in 2015, and was the talk of the town after the young royal bent down to give her a kiss on the cheek.

Two years later, the pair crossed paths again when they shared a kiss and hug after she waited to meet him in the pouring rain in Sydney when Harry was in town to announce his popular Invictus Games were heading to Australia.

Then last October, after waiting for him all morning at the Sydney Opera House, Daphne and Harry shared another sweet moment. As the Duke and Duchess of Sussex made their way through the waiting well-wishers, the prince caught a glimpse of Daphne and made a bee-line for her, planting another kiss on her cheek.

Meghan soon caught up with them and royal couple spent a few minutes chatting with Daphne, who at one point put her hand on Harry’s face, before his wife Meghan leaned in to kiss her on the cheek and to thank her for her kind words.

Daphne also gave the pair what appeared to be a thoughtful homemade card, which featured a lovely photograph of Harry and the 99-year-old on the cover.

Are you a fan of Prince Harry? What do you think of his thoughtful letter?