The Royal Family delight the public with latest royal portrait 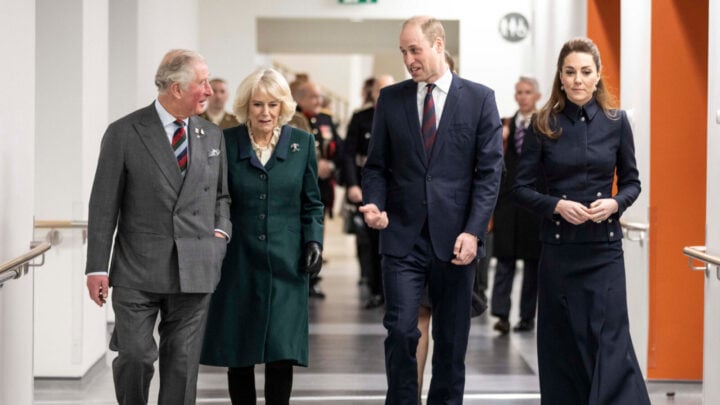 A newly released portrait from the Royal Family of King Charles III and Queen Consort Camilla alongside the Prince and Princess of Wales has delighted royal watchers who claim “the future of The Monarchy is in safe hands.”

Taken on the eve of the Queen’s state funeral, the new portrait shows the four Royal Family members alongside each other, dressed in all-black mourning clothes as they hosted world leaders at a reception at Buckingham Palace.

“Their Majesties The King and The Queen Consort with Their Royal Highnesses The Prince and Princess of Wales,” the caption alongside the photo read.

The photo which shows the new era of the Royal Family left fans elated, with some claiming that “Queen Elizabeth would be so proud of them”.

“The present & the future of The Monarchy is in safe hands,” commented another.

“The authentic fantastic four. Queen Elizabeth would be so proud of them.”

“All smiles from this happy bunch!”

“Makes me proud to be British, truly lovely people.”

The recent portrait isn’t the only image getting royal fans talking after the United Kingdom Royal Mint revealed the official effigy of King Charles III that will not only feature as part of a coin collection honouring the late Queen Elizabeth but will also appear on coins following King Charles’ official ascension to the throne.

Sticking with royal tradition, King Charles’ portrait will face left as each new Monarch is required to face the opposite direction from their predecessor.

While announcing the new coin, the Royal Mint conveyed their “honour to now strike the first UK effigy of His Majesty King Charles III”.

“Today we are honoured to reveal the first official effigy of His Majesty King Charles III appearing for the first time on a memorial coin collection honouring the life and legacy of Queen Elizabeth II,” the Royal Mint said in a statement.

“At The Royal Mint, we have struck coins for the British monarchy for more than 1,100 years, and it has been our pride and privilege to strike every United Kingdom coin of Queen Elizabeth II’s remarkable 70-year reign. It is our honour to now strike the first UK effigy of His Majesty King Charles III on a coinage collection honouring the life and legacy of his mother Queen Elizabeth II.”

The effigy was designed by acclaimed British sculptor, Martin Jennings, and received the royal tick of approval from King Charles himself.

“I was delighted to hear that The King likes the image. He was very interested in it and responded very positively to it. It has been very gratifying to be involved in this important process,” Jennings said.

Coins featuring the portrait of Queen Elizabeth II and King Charles III are expected to continue to circulate in the years to come.