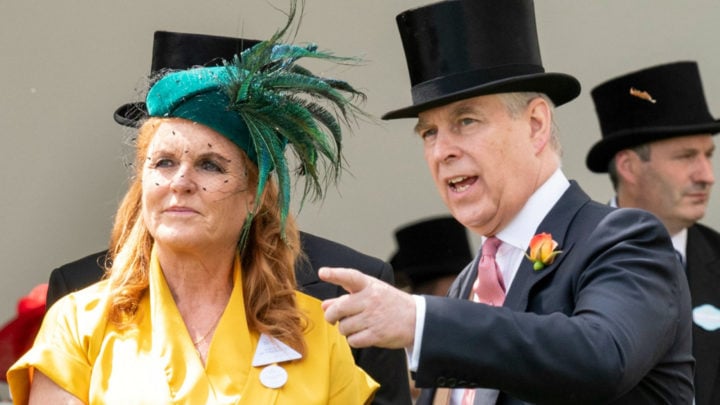 The couple, pictured together at Royal Ascot earlier this year, divorced in 1996 but remain close. Source: Getty.

The Duchess of York has publicly defended her former husband Prince Andrew after his interview with the BBC’s Newsnight program aired in the UK on Saturday evening.

The couple, who got divorced after 10 years of marriage in 1996, have remained close ever since their split and Sarah Ferguson wasted no time in declaring her support for Prince Andrew yesterday, as snippets from the interview began to surface and make headlines around the world.

“It is so rare to meet people that are able to speak from their hearts with honesty and pure real truth, that remain steadfast and strong to their beliefs,” she wrote on Instagram on Saturday, ahead of the BBC’s Newsnight program. “Andrew is a true and real gentleman and is stoically steadfast to not only his duty but also his kindness and goodness of always seeing the best in people.

“We have always walked tall and strong, he for me and me for him. We are the best examples of joint parenting, with both our girls and I go back to my three C’s .. Communicate, Compromise, Compassion.”

Sarah also shared four images of her ex-husband alongside the supportive tweet, three of which showed him in his military uniform.

Her message came after two clips were released to the public on Friday evening (UK time) which revealed some of the answers given by the duke during his first ever interview about the ongoing Jeffrey Epstein saga. He sat down with BBC Newsnight reporter Emily Maitlis inside the walls of Buckingham Palace on Thursday and the full hour-long interview aired at 9pm on Saturday in the UK.

In one preview clip shared by the BBC, Maitlis broached the subject of the allegations made against the duke and asked him: “One of Epstein’s accusers Virginia Roberts has made allegations against you. She says she met you in 2001.

“She says you dined with you, danced with you at Tramp nightclub in London. She went on to have sex with you in a house in Belgravia, belonging to Ghislaine Maxwell, your friend. Your response?”

Shaking his head, Andrew replied: “I have no recollection of ever meeting this lady.”

During the interview, the duke vehemently denied having sex with Virginia Roberts,. saying: “It didn’t happen. I can absolutely categorically tell you it never happened.”

Prince Andrew also discussed his decision to stay with Epstein at his home in 2010, two years after the financier was convicted of soliciting a minor for prostitution. Describing his actions at the time as not “becoming of a member of the royal family”, he said: “That’s the bit that… as it were, I kick myself for on a daily basis because it was not something that was becoming of a member of the Royal Family and we try and uphold the highest standards and practices and I let the side down, simple as that.”

Epstein was found dead from an apparent suicide in his cell in Metropolitan Correctional Center (sic) in August, where he was awaiting trial on charges of conspiracy and sex trafficking. He was rushed to New York Downtown Hospital but later pronounced dead.

His death came just days after a lawsuit from one of his alleged victims was unsealed, naming Prince Andrew and more of his former high profile friends. One of the financier’s accusers – Roberts – said that she was forced to have sex with the senior royal on three occasions between 1999, when she was 17, and 2002. At the time she would have been under-age according to Florida state law, reports the BBC.

After the allegations were made public, an official statement was released by the palace which read: “His Royal Highness deplores the exploitation of any human being and the suggestion he would condone, participate in or encourage any such behaviour is abhorrent.”