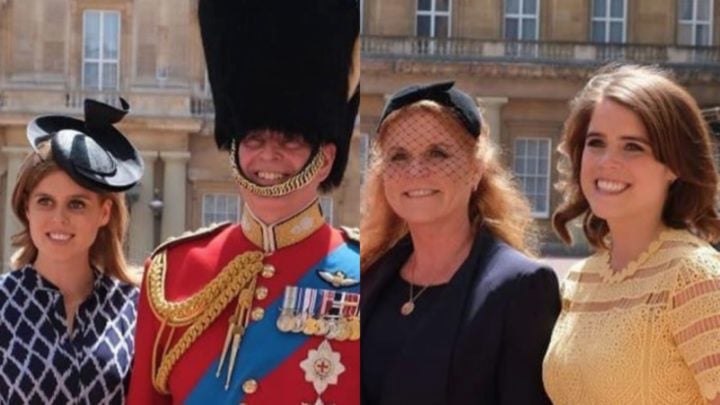 The York family enjoyed a special outing at the weekend. Source: Instagram/ princesseugenie

The York family delighted royal fans at the weekend as they stepped out together for a special occasion in support of Prince Andrew.

Princess Beatrice and Eugenie joined their mother and father Sarah Ferguson “Fergie” and the Duke of York on Saturday as Andrew undertook his formal duty as Colonel of the Grenadier Guards.

In a post shared on social media the gorgeous family sported huge smiles on their faces as they stood side by side outside Buckingham Palace.

The Queen’s son stood proudly in his full uniform alongside Sarah who looked lovely in black dress and jacket. Eugenie added a pop of colour in a beautiful yellow frock while Beatrice glowed in a navy blue and white patterned dress.

In the post on Instagram Eugenie also shared a sweet message to her “papa” commending him for his hard work with the guards.

“Today, the Yorks were really proud of Papa @hrhthedukeofyork as Colonel of the @grenadier.guards,” it read.

“He reviewed the parade and took the salute at the Colonel’s Review. The Grenadier Guards will troop their colour next week in front of their colonel-in-chief, Her Majesty The Queen.”

Fans were quick to comment on the beautiful post with many sparking rumours Andrew and Sarah have rekindled their romance.

“Get back together again they look like they never get divorced,” one person commented.

“I love when Sarah is with them!” another added.

While a third said: “Congrats! What a proud moment. Love seeing you all together!”

The Duke of York also took to social media to share a snap from the day as he treated his horse to a special snack.

In the image the royal can be seen with his palm under the animal’s mouth having given the horse a treat following the formal proceedings.

“Celebratory carrots for Darby, The Duke of York’s horse, after a successful Colonel’s Review this morning,” the post read.

It has been a busy week for Eugenie and Beatrice who were spotted last week alongside Her Majesty the Queen at a garden party at Buckingham Palace.

Beatrice, 30, made a statement in a bold crimson frock which featured a vibrant floral pattern in shades of blue and orange. The dress fell below her knees and featured a tiered hem and ruffled sleeves. The daughter of Prince Andrew and Sarah Ferguson completed the pretty look with a statement headband, in a similar shade of maroon, and a pair of pointed black court shoes.

The youngest daughter of the Duke and Duchess of York, who tied the knot to long-term partner Jack Brooksbank last October, matched her fascinator perfectly to the pleated skirt of her wrap dress, which she paired with statement studded heels.

Are you a fan of the York family? Would you like to see Prince Andrew and Sarah Ferguson get back together?