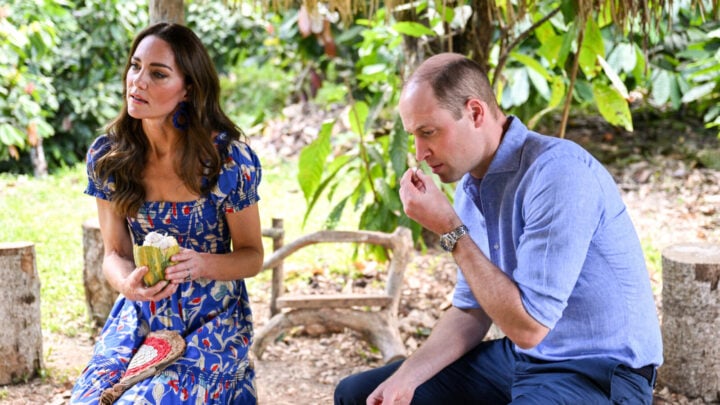 William and Kate immersed themselves in the local chocolate-making process as they grinded cocoa nibs and heard first-hand how the Mayans produced chocolate. Source: Getty

The Duke and Duchess of Cambridge have indulged their love for chocolate and dance as they embarked on their first royal tour together since the global pandemic.

The trip comes in an effort to reinforce the UK’s long-standing ties with the Commonwealth as Queen Elizabeth celebrates her Platinum Jubilee year, marking 70 years on the throne.

On Sunday, March 20, the couple visited the Che’il Mayan Chocolate Factory in Belize in an effort to gain insight into the nation’s local production processes and sustainability, where they enjoyed a number of unique cultural experiences together.

Ever the gracious guests, William and Kate immersed themselves in the local chocolate-making process as they ground cocoa nibs and heard first-hand how the Mayans produced chocolate. During a demonstration, the couple admired the chocolate worker’s seamless skill, commenting on how effortless it looked for him.

“You make it look so easy,” Kate complimented while looking the picture of casual beauty as she donned a stunning blue floral dress, statement blue earrings, and understated nude wedges to compliment.

“If I did that, I’d lose a finger,” added William, ever the light-hearted accomplice as he sported a long-sleeved blue linen shirt and dark blue chinos.

During the visit, the couple engaged in some fun-loving activities as they joined in a welcome dance from the village residents, with Kate taking the lead with a pair of wooden maracas as she danced along with local school children at the Carifina Cultural Centre.

Local organiser, Laura Cacho, revealed the couple hadn’t held back as they showed off their groovy dance moves.

“They were shaking their waists like nobody’s business,” said Cacho to the Daily Mail.

Cacho revealed it was William who really stood out, describing the Prince as possessing “great rhythm”.

“He shook his waist to the music. He had beautiful rhythm. It was a pleasure for me. Kate was excellent as well and definitely has Garifuna culture in her.”

More importantly, the couple indulged in the incredible chocolate fountains on display as they dipped tortilla chips into the creamy mixture and sipped on organic-made hot chocolate.

The Duchess cheekily revealed that her young children would “be very jealous” of her and William’s delicious chocolate-tasting experiences.

On the second day of the trip, the couple were told of chocolate’s health benefits including its high antioxidant levels and a number of other noteworthy properties, to which the Duke was pleasantly surprised.

“Are you saying chocolate is good for us?” William exclaimed.

The Duke and Duchess’s recent trip to Belize marks the royal couple’s latest engagement, having visited a number of local communities and other events in the past weeks including a special trip to Wales on March 2 where the couple prepared baked treats together on a visit to Blaenavon Hwb, a community based youth centre.

Most recently, the couple attended St Patrick’s Day parade in Aldershot where they presented traditional sprigs of shamrock to the officers and guardsmen and shared a rather hilarious moment with a soldier’s toddler.

Who would have known the couple were so groovy?!