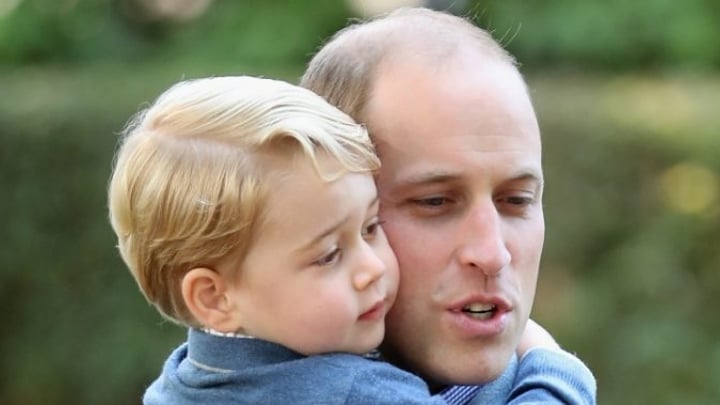 Royalists say Prince George looks a lot like his father in the new portrait. Source: Getty

Prince George is growing up so fast! It seems like only yesterday Prince William and Catherine were introducing their little bundle of joy to the world. On Sunday, the future king of England is celebrating his fifth birthday.

To celebrate, the Palace has released an unseen photo of little George ahead of his big day. In the new portrait, captured by photographer Matt Prteous, George can be seen grinning from ear to ear with a cheeky smile. He’s wearing a smart white shirt and blue trousers in the shot.

“The Duke and Duchess of Cambridge are very pleased to share a new photograph of Prince George to mark his fifth birthday,” a post by the Palace on Instagram read. “Thank you everyone for your lovely messages.”

Royalists have left their well-wishes for the birthday boy, noting that he is looking more like his parents and family members as he gets older.

“He looks more like William as he grows. He’s going to be a true Prince Charming,” one person on Twitter wrote.

A third comment added: “Absolutely adorable! A charming little boy with a beautiful smile. Thank you for sharing with us this picture. Happy birthday Prince George”.

It’s becoming somewhat of a tradition for the Duke and Duchess of Cambridge to release a portrait of their son each year on his birthday. Last year, royalists went crazy when the photo of a beaming Prince George was released.

It’s not the only way he’s being celebrated on is fifth birthday. The Royal Mint in the United Kingdom is releasing a special £5 coin featuring the prince’s namesake St George. The Royal Mint said that stories of knights and dragons are a big part of a five-year-old’s life and chose to reference both fairy tale and family heritage in the new design.

If that wasn’t enough, Prince George was also given the honour of appearing in his favourite cartoon. To mark the 30th anniversary of animated series Fireman Sam, the show’s creators last year revealed they were introducing a character based on the young royal, given how fond of the show he is. It came after Prince William revealed just how of a fan of the show his son really is.

“Fireman Sam has taken an awful lot of interest,” Prince William said on BBC Radio 1. “George has gone past his Peppa Pig stage.”

Do you have a birthday message for Prince George? How old are your grandchildren?