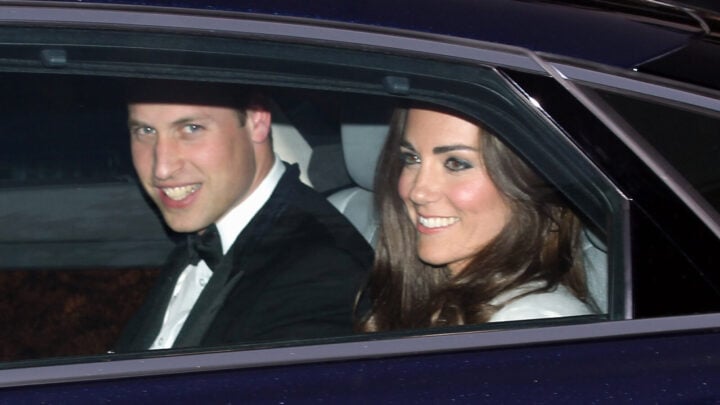 Photos of a young Prince William and Kate Middleton have resurfaced, showing the pair in their 20s partying “like normal young people”.

Although the royal pair are nothing but class and regality now, in a slideshow of images shared to Tik Tok, the couple are seen happily dancing together and looking giddy and intoxicated sitting in the backseat of different cars.

The slideshow captioned, “party hard, like normal young people”, features an image of the Prince being silly with a pal, standing with a pair of underwear over his pants.

The photos prove that the Duchess hasn’t aged a day and offer a glimpse into her fun side with one image showing a beaming Kate taking a photo of the paparazzi with her phone.

Fans of the Royal couple now in their 40s with three children, took to social media to comment on the “iconic” images, with the majority pointing out just how stunning Kate has always been.

“How is she so photogenic! These are the roughest pictures of her in existence and she still looks like a flipping goddess!,” one person wrote.

“And you wonder why I love them both so much they’re iconic,” another commented.

“I must be old, I remember this when it happened. How is it that she has only gotten prettier though?”

The photos are a stark contrast to the composed Royals we see today, with no partying, and instead attending to their Royal duties.

In a more accurate depiction of the couple now, the first official joint portrait of the Duke and Duchess of Cambridge was unveiled at the University of Cambridge’s Fitzwilliam Museum on Thursday, June 23.

William and Kate were both on hand to reveal the portrait to the public for the first time which was commissioned by the Cambridgeshire Royal Portrait Fund in 2021 and painted by artist Jamie Coreth as a gift to Cambridgeshire.

Kate wears a metallic emerald dress by The Vampire’s Wife, in the portrait, the same outfit she wore during a visit to Dublin in 2020. William looks smartly dressed alongside his wife, wearing a suit with a blue tie.

Coreth revealed in a statement that creating the portrait of the royal couple was “the most extraordinary privilege” of his life.

“I wanted to show Their Royal Highnesses in a manner where they appeared both relaxed and approachable, as well as elegant and dignified,” he said.

“As it is the first portrait to depict them together, and specifically during their time as The Duke and Duchess of Cambridge, I wanted the image to evoke a feeling of balance between their public and private lives.”