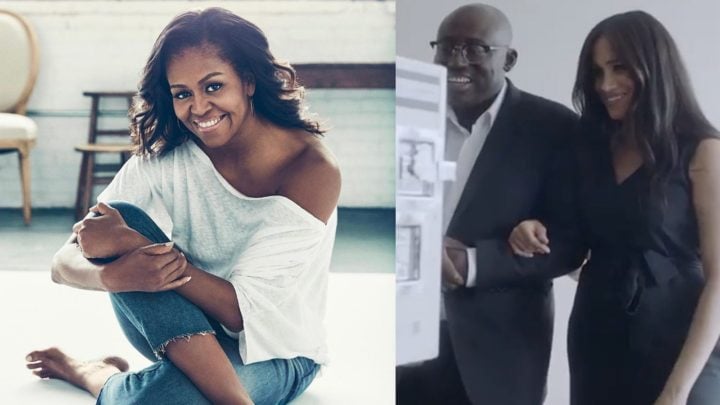 Meghan may have had a busy royal schedule while she was pregnant with baby Archie, but she took some time away from it to carry out a very powerful interview with Michelle Obama.

The Duchess of Sussex has guest edited the September issue of British Vogue and had the chance to choose one influential woman to interview for the magazine’s Q&A section – with the new royal choosing “former First Lady and now friend” Michelle for the honour.

Now, just hours after confirming the role, Meghan’s full interview with the mother-of-two has been revealed by the mag – and includes powerful words on motherhood, her charity work and what her 15-year-old self would say to her now.

“Over a casual lunch of chicken tacos and my ever-burgeoning bump, I asked Michelle if she would help me with this secret project,” Meghan, 37, revealed in a moving and personal blurb accompanying the interview.

She admitted she was left “speechless” when she received Michelle’s answers to her questions, and ended up regretting now digging deeper and asking more having read the in-depth answers.

When asked what motherhood has taught her, Michelle, 55, admitted it had been “a masterclass in letting go”. Michelle shares two daughters Malia and Sasha with her husband Barack.

Meghan’s next question then expanded on the topic, asking Michelle what her advice to her daughters would be.

At this point Michelle reflected slightly on her own childhood, and advised her daughters not to simply check off boxes they believe need to be checked. Instead, she said they needed to try different things to find what feels right.

Using her own past as an example, Michelle said she initially believed she wanted to be a lawyer, but it took a few years for her to realise that wasn’t right for her.

“As a younger woman, I spent too much time worrying that I wasn’t achieving enough, or I was straying too far from what I thought was the prescribed path,” she added to the publication. “What I hope my daughters will realise a little earlier is that there is no prescribed path, that it’s OK to swerve, and that the confidence they need to recognise that will come with time.”

Meghan, who now has baby Archie since carrying out the interview, then asked how that advice would differ if Michelle had sons – but she confirmed it would remain exactly the same, as her own father had done with her and her brother as it’s important to “treat boys and girls exactly the same”.

Moving on, Meghan then delved into the former first lady’s charity work with Girls Opportunity Alliance, an education charity for younger girls.

Michelle described the number of girls missing out on education as a “tragedy” and revealed she’d been inspired by her own education and the effect it had on her life when setting up the charity.

However, one of Michelle’s favourite questions from the duchess came when she was asked what her 15-year-old self would say to her now.

“I had a lot of fun when I was 15, but when it came right down to it, teenage-me was pretty by the book,” Michelle told Meghan.

However, she insisted her younger self would feel great pride at how far she’d come, before joking: “If I’m being honest, she’d probably smile about how cute my husband is, too.”

The interview came to an end with a wild card question, as Meghan asked Michelle for her favourite sound.

Michelle took her answer back to the core of the interview – motherhood – revealing it would be listening to her daughters sleeping as newborns.

“Don’t get me wrong, early parenthood is exhausting. I’m sure you know a thing or two about that these days,” she joked. “I’m so excited for you and Harry to experience that, Meghan. Savour it all,” she added.

The September issue of British Vogue, guest-edited by The Duchess of Sussex, is available on newsstands and digital download on Friday, August 2.

What do you think of Meghan’s interview with Michelle Obama? How would you have answered these questions? Do you think the guest editing role was a good idea?