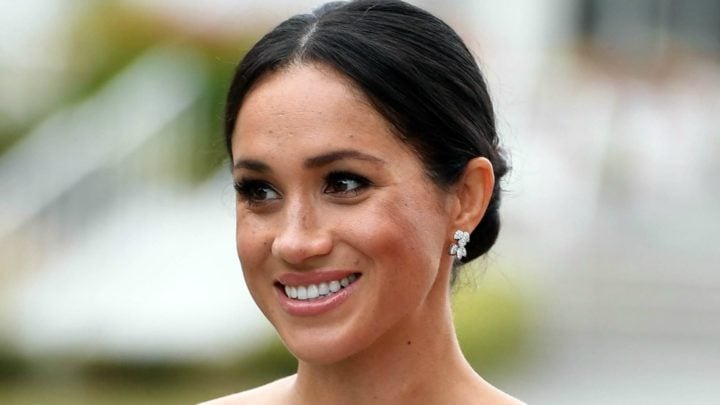 Since joining the royal family in May last year, Meghan has copped some heavy criticism from royal spectators. Source: Getty

She’s been on the receiving end of a barrage of public criticism in recent months and now the Duchess of Sussex has been named Britain’s top social climber by lifestyle magazine Tatler – and the title has divided the internet. According to the Daily Mail, the magazine claimed Meghan has reached “the pinnacle of the greasy pole”.

Describing the royal’s “A-list ascent”, the magazine reportedly wrote: “Not quite a rags-to-riches tale (she was privately educated and her scapegrace father won an Emmy for lighting direction) but the Ralph & Russo-clad beacon of change has found a role that suits her to perfection: a tungsten toughie to drag the royal family into the 21st century.”

The controversial list – which also names British politician John Bercow and former supermodel Jerry Hall, who came second and third respectively – has received mixed reactions from social media users online, with many slamming the magazine for targeting the new mother.

“The level of disrespect towards this woman [is] shocking!” one commentator wrote. Whil another added: “Why can’t people just leave others alone, it’s no ones business.”

However, others criticised Meghan, with one writing: “They royal family was going fine without her. She’s a self-centred, ‘me, me, me’ type of personality, always to her convenience and she displays her manipulative tactics.”

Another added: “Her and Harry should also be crowned the top hypocrites. Do as we say, not as we do.” While a third wrote: “That sums her up perfectly.”

It comes after a few days after a TV segment on the Duchess of Sussex caused a major stir online, with many labelling the controversial television show a “witch hunt” – while others fiercely defended it. Australian show 60 Minutes came under fire last week after it released a one-minute promo video for the episode, which aired on Sunday night.

The show’s Twitter account at the time posted a preview from the segment with the caption: “#Megxit! How Meghan Markle lost her sparkle. From adored to insufferable in less than a year. What went wrong for Meghan, and how it affects hubby Harry. SUNDAY on #60Mins: Inside a Royal crisis. Can the ghost of Princess Diana save a fairytale?”

Snippets from the episode, which investigated how “Meghan Markle lost her sparkle, showed Karl Stefanovic interviewing outspoken and self-proclaimed ‘Biggest B***h in Britain’ commentator Katie Hopkins and Meghan’s supposed former friend Lizzie Cundy, who described the duchess as “manipulative” in the promo.

Elsewhere, Hopkins criticised the new mum saying that Meghan “wears bad clothes”, “is a no one” and is also the “biggest hypocrite there is”. The promo then touched on the backlash Meghan and Prince Harry recently copped after taking two private jet trips in one week.

Many on Twitter slammed the segment, with one commentator writing: “I wouldn’t say that Meghan has lost her sparkle. She is still adored by so many people. We still love her very much. Meghan, Harry and Archie are very popular and that popularity will likely increase with their upcoming tour. This is just a case of someone starting trouble.”

However, others applauded 60 Minutes’ efforts, with one social media user writing: “Someone needs to put her in her place now and tell her she’s part of the royal institution and funded by the people, so start ‘acting’ the part you signed up for!” Another added: “Diana was a kind soul that cared about people. Markle is a climber that only cares about herself and her trajectory.”

In recent months Meghan and Harry have been at the wrong end of public criticism. The couple faced backlash from severals popular tabloids for using private jets for trips with their son Archie last month. Meanwhile, the couple also copped criticism earlier this year for keeping details of son Archie’s birth and christening private.

What are your thoughts on this story? Are you a fan of Meghan?