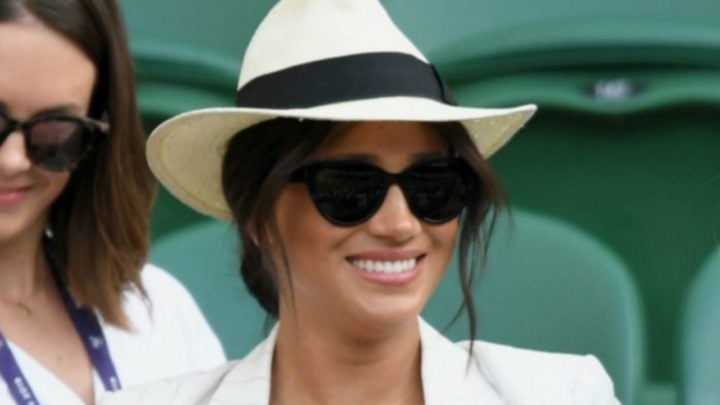 The Duchess of Sussex stepped out with a couple of girlfriends last week at Wimbledon to cheer on close pal Serena Williams. Source: Getty

Last week, Meghan made a surprise public appearance as she stepped out with a couple of girlfriends at Wimbledon to cheer on close pal Serena Williams as she took on, and beat, opponent Kaja Juvan.

But the former actress is now facing backlash after a report from The Daily Telegraph claimed that Meghan’s staff asked people, specifically, a woman named Sally Jones, not to take photos of her at Wimbledon because she was there in “a private capacity”.

Jones later told MailOnline the duchess was “clearly looking around looking to see who was looking at her”.

Meanwhile, it comes after the new parents held a private christening for their son Archie at Windsor Castle over the weekend. Harry and Meghan chose not to publicly release the names of Archie’s godparents and only released pictures to the media afterwards.

Some royal fans, however, weren’t too happy about it, including royal author Penny Juror who criticised the couple’s decision.

“They can’t have it both ways. Either they are totally private, pay for their own house and disappear out of view or play the game the way it is played,” she told The Times.