A very royal Christmas! The best festive cards ever sent by the British Royal Family 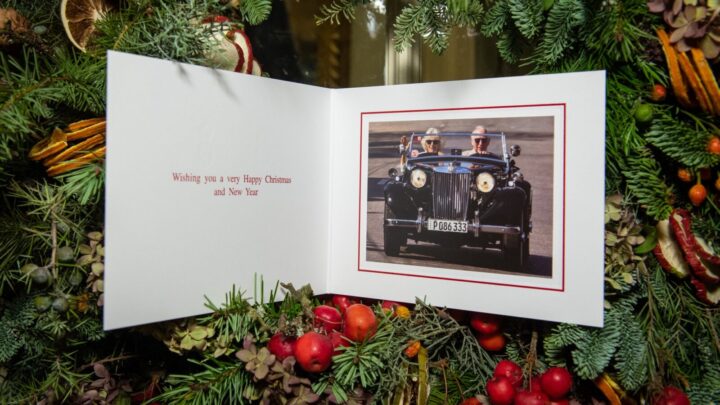 Sending the annual Christmas card is a tradition almost as old and grand as the royal family themselves. Nowadays, the Senior Royals even select their favourite shot of the year to take centre stage on the front of the card they send out.

So, now that we’ve been treated to this year’s festive selections, let’s take a look at what made the cut over the past century of the beloved tradition!

Over a century ago, one of the first royal Christmas cards known to the world was created by King George V and his wife Mary. It was addressed to the British troops as a way for the royals to send the soldiers their best wishes as well as hope for a safe return home. The postcard is a stoic representation of the Monarchy in the early twentieth century and still to this day acts as a rich piece of history.

Ten years before she was crowned as Queen, then-Princess Elizabeth sent out her yearly Christmas card at the ripe age of 16. Her message is addressed to the Grenadier Guards regiment of the British Army as she became the Colonel on her birthday earlier that year.

Despite their lengthy and very public romance, this was the first year that Camilla appeared on the annual Christmas cards. The photo was taken at their wedding in April of that year and includes the newlyweds and their collective children Prince William, Prince Harry and Laura and Tom Parker Bowles.

Despite being an absolutely adorable photo of the family, 2015 was made even more special as it marked Princess Charlotte’s first Christmas. The snap was taken in late October of that year by photographer Chris Jelf.  In a statement released with the photo, Kensington Palace stated that William and Catherine were “very much looking forward to their first Christmas as a family of four”.

In 2018, newlyweds Prince Harry and Meghan Markle handed out their first solo Christmas card with a picturesque shot of the pair in a close embrace as they looked over fireworks. The shot was taken from their wedding earlier that year at Frogmore House and shows the Duchess still in her stunning white reception gown.

While 2021 was a tumultuous year for the world, with everyone adjusting to society’s “new normal”, Meghan and Harry warmed the hearts of royal fans across the globe by releasing the first-ever image of their daughter Lilibet on their 2021 Christmas card. “This year, 2021, we welcomed our daughter, Lilibet, to the world. Archie made us a ‘Mama’ and a ‘Papa’, and Lili made us a family”, the message on their card read.

Catherine and William have become known for their down-to-earth Christmas cards and 2021 was no different. In keeping with royal tradition, the couple shared a portrait of their family which was taken during a private trip to Jordan earlier in the year. The festive portrait shows the couple, seated in front of what looks to be a white and copper-coloured sandstone rock formation.  The Royal heir sports matching khaki leather moccasins and rests his left hand fondly on the lap of his wife. Their now-grown children sit by their side with cheeky smiles.

In 2021, then-Prince Charles and then-Duchess Camilla’s Christmas card perfectly summed up the unusual year. In the candid photo, the King and his wife are seen wearing face masks while attending the Royal Ascot that summer. The snap shows Charles wearing a black mask as he helps Camilla adjust hers. It is understood that while the 2021 Royal Ascot pushed through, organisers had strongly encouraged attendees to wear face masks around the venue.

The image chosen for Charles and Camilla’s first Christmas card of their reign shows a candid shot of His Majesty and the Queen Consort at the Braemar Royal Highland Gathering on September 3, a week prior to Queen Elizabeth II’s death. In the photo, the Queen Consort, lovingly gazes over to her husband who looks smart in his tweed suit jacket with gold accents. This year’s photo was captured by royal photographer Sam Hussein, who also took the photo the couple chose for their 2021 Christmas card.

What is your favourite royal Christmas shot? Did you like the photo that was chosen this year?