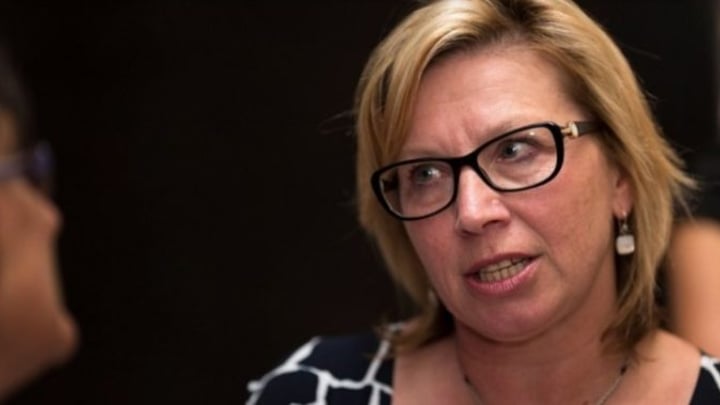 Rosie Batty has reached out to a devastated mum. Source: Getty.

Domestic violence campaigner Rosie Batty has sent a heartfelt message to the mother of two children killed by their own father in a horrific attack.

Olga Edwards, 36, is said to have collapsed when she heard her 15-year-old son Jack and 13-year-old daughter Jennifer had been shot by their father John Edwards in north-west Sydney on Thursday, before he turned the gun on himself.

Speaking at an anti-violence fundraiser in Adelaide, a tearful Rosie dedicated her speech to Olga, and admitted she understands the pain she’s going through, after her own 11-year-old son Luke was killed by his father Greg Anderson in 2014.

“You have a 13-year-old girl and a 15-year-old boy, siblings, who’ve been shot dead in a clearly highly barbaric, frightening manner by their father,’ she said, according to the Adelaide Advertiser.

“And their mother has come home to be greeted with this reality. How the hell do you recover from that?

He'd been a volunteer firefighter, helped out at the local AFL club and was their dad. But John Edwards did the unthinkable – shooting dead his teenage son and daughter, before turning the gun on himself. @elisebaker9 @mr_timdavies #9News pic.twitter.com/NvZovBK9bn

“I know what that woman will be going through… the pain of thinking were they in fear before they were killed? Could I have stopped it?”

Police reportedly confirmed this week that 68-year-old financial planner John Edwards killed his children and himself, and his actions were later described as “premeditated and planned”, the Daily Telegraph reports.

The publication claims he had been planning the murder for a year, and had registered for his firearms licence in late 2017 – before purchasing several guns.

He and ex-wife Olga had been locked in a custody row, but had reportedly come to the conclusion that the children would live full-time with her.

Batty took up her fight against domestic violence after her abusive husband killed her son Luke in a public park.