‘Get off my lawn’: ScoMo ushered off Aussie homeowner’s lawn on live TV 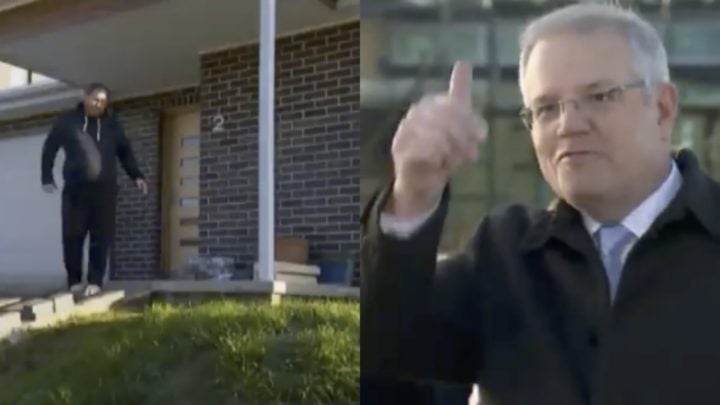 An Aussie homeowner called out ScoMo and a group of press for standing on his lawn. Source: Twitter/ Jonathan Kearsley

Prime Minister Scott Morrison was interrupted in perhaps the most Australian way this week, when a man ushered him off of his lush, green lawn.

The politician was speaking to the media on Thursday morning in Googong, New South Wales about the government’s new $688 million Homebuilder scheme when a man emerged from his home to scold the group for ruining his pristine front yard. Like many other Aussies who are incredibly proud of their lawns, the man wasn’t afraid to step in, calling out to Morrison in the middle of the press conference.

In a video, which has since gone viral, the homeowner could be heard in the background calling out, “can everyone get off the grass please?”. Thankfully, the exchange was met with a friendly response from the PM who quickly asked the crowd of press to move off the lawn. “Sure, let’s just move back from there,” he could be heard saying.

Nothing wrong with having pride in your lawn… @9NewsAUS #auspol pic.twitter.com/mQ5eqBmnvC

However, when the man noticed people weren’t listening to Morrison’s request and were still standing on his much-loved lawn he chimed in again. “Hey guys, I’ve just re-seeded that.” To which the prime minister replied with a smile and a thumbs-up: “All good, it’s all good.”

Speaking about the exchange during an interview on 2GB shortly after, Morrison described it as “quite funny” and said like many others around the country, the man was very house-proud and just didn’t want anyone destroying his newly seeded lawn.

“It was quite funny because we were out there at Googong which is you know a housing estate like so many all around the country, and people are very house-proud and this bloke had just built his house and all the media was standing on part of his lawn that he’d just re-seeded,” Morrison explained to host Ray Hadley. “And so he wasn’t yelling at me, but he came and said ‘get off my lawn’. So I ushered them off the lawned area and he was quite happy then, he said thanks and went back inside. So it was, it was quite funny actually.”

Understanding of the man’s actions Hadley replied: “I’ve got some mates who absolutely love their lawn and they find a cigarette butt or a match on it, they go into a state of conniption, that someone’s left it there and so … I was laughing my head off about it.”

But, it’s not just Hadley who has been entertained by the man’s actions, with the video of the interaction quickly spreading across social media. In fact, the homeowner has been hailed a hero by some, who can relate to his actions and are equally proud of their front lawns.

“Absolutely! What was the PM thinking, especially after re-seeding,” @BenRobe82583334 commented on Twitter. While Monika Saw wrote on Facebook: “I likewise would have asked people to get off my lawn!” And @officially_vm added: “That’s a true blue Australian man.”

Do you have lawn at your property? Can you relate to this man's actions?