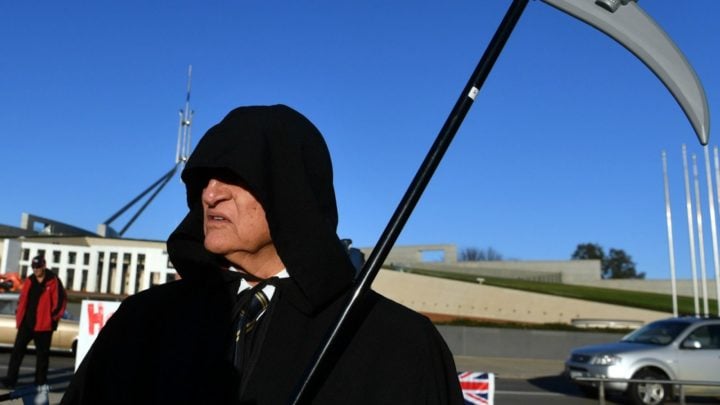 Bob Katter showed up outside of Parliament House yesterday dressed up as the grim reaper to protest the closure of Holden in Australia. Source: Getty.

Bob Katter is no stranger to controversy and the Aussie MP turned heads on Thursday after he showed up outside of Parliament House in Canberra dressed up as the Grim Reaper to protest the closure of Holden in Australia. Holding on to a plastic scythe and a sign reading “Holden on to Aussie Jobs” the federal member for Kennedy watched on as a procession of classic Holden cars drove past Parliament House.

“My father bought one of the first Holdens built in Queensland,” Katter said, according to The Guardian. “Now the bunch of dummies that occupy the place behind me here, they stood aside and watched every single secondary industry [die]. We’ve got to do some reaping now.”

The Government is in control of which industries live and which industries die. If every government car was built in Australia, Holden would be in a very different position today #holdenontoaussiejobs #auspol #aussiemanufacturing pic.twitter.com/WS1t4bvOqo

Katter said he was introducing a motion in the House of Representatives to force the government to support the reestablishment of an Australian car industry after General Motors pulled the pin on Holden.

In February General Motors announced that it has decided to retire Holden in Australia and New Zealand at the end of this year. A statement released by Holden at the time described the decision as a “difficult” one but reassured customers that all existing warranties, guarantees and servicing would still be honoured by General Motors (GM).

“GM has taken this difficult decision after an exhaustive analysis of the investment required for Holden to be competitive for the long term in Australia’s and New Zealand’s new car markets,” the statement read. “Regrettably, this assessment determined such an investment could not meet GM’s investment thresholds, including delivering an appropriate return.

One user commented: “What is it with politicians? Meet Bob Katter, a maverick MP for far north QLD, dressed as the Grim Reaper, lamenting the death of the Australian car industry.”

While another added: “Great to see Bob Katter continuing the good old Aussie tradition of politicians donning a dramatic outfit for a questionable publicity stunt. At least this time around it wasn’t hideously racist and offensive

And @PhillipCoorey wrote: “Was just buying a pie when Bob Katter walked past dressed as the Grim Reaper followed by a staffer saying “Bob, you can’t go into the chamber like that, Bob…” Odd place this, sometimes.”