Bob Hawke’s will: Former PM ‘left nothing to his three children’ 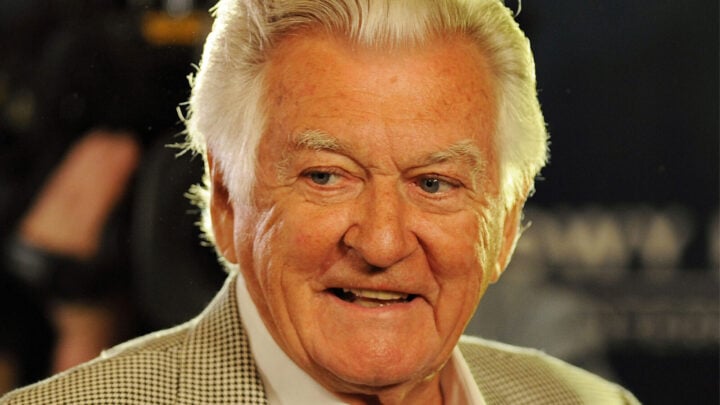 The former prime minister died in May 2019. Source: Getty.

Former Prime Minister Bob Hawke reportedly didn’t leave a cent to his three children in his will, according to the Daily Mail. The publication, which claims to have obtained a copy of Hawke’s will, reports that Hawke bequeathed his entire estate to second wife and former mistress Blanche d’Alpuget, whom he married in 1995.

While Hawke allegedly left nothing to his children – whom he shared with first wife Hazel Hawke – in his will, Rosslyn Dillon, Stephen Hawke and Susan Pieters-Hawke are said to have each been given $750,000 from the sale of Hawke’s Northbridge property. It was also previously reported that d’Alpuget’s son Louis Pratt received the same sum.

Following Hawke’s death at the age of 89, Blanche made the decision to auction off many of Hawke’s possessions in August last year, selling everything from beer mugs engraved with his name to a silver bowl Hawke was given by the former US secretary of state Dick Cheney, and the practice and formal batons used to conduct the hallelujah chorus for his 80th birthday at the Sydney Opera House.

The former Labor leader, who was Australia’s longest-serving prime minister, passed away on May 16, 2019, in the home he shared with Blanche in Sydney. Hawke led the Labor party from 1983 to 1991 and helped shape modern Australia though social policies that saw him establish Medicare and champion environmental issues.

Blanche confirmed his news at the time and released a statement to the media, which read: “Today we lost Bob Hawke, a great Australian – many would say the greatest Australian of the post-war era.

“I and Bob’s children, Sue, Stephen, Rosslyn and stepson, Louis, and his grandchildren, will hold a private funeral. A memorial service will be held in Sydney in coming weeks.