Too soon or a wise decision? Over-60s weigh in on sale of Bob Hawke’s possessions 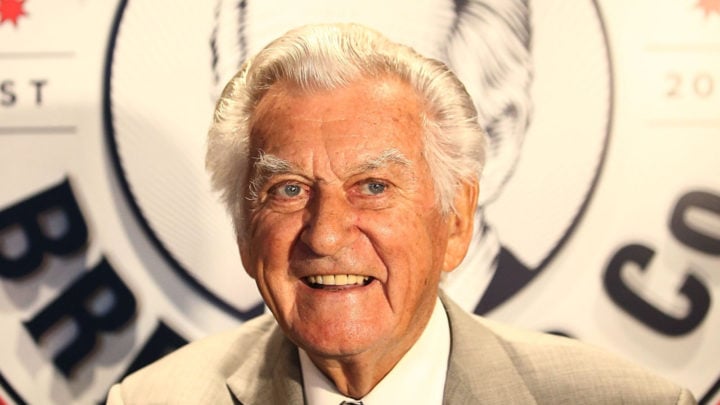 Bob Hawke's valued possessions will go on sale this weekend in Sydney months after his death. Source: Getty

Losing a loved one is hard enough but parting with their possessions can add another challenge to the process with so many memories attached to certain treasured items. Even the thought of giving away or selling belongings just bring a tear to one’s eye as they think back to all the times shared together with their beloved partner or family members.

However, that’s exactly what Bob Hawke’s widow Blanche d’Alpuget is doing with an impressive collection of mementos set for sale at a massive auction this weekend. The 75-year-old has made a decision that many would find unbearable and is parting with the house full of items just months after the former prime minister passed away.

From beer mugs engraved with his name to a silver bowl Hawke was given by the former US secretary of state Dick Cheney and the practice and formal batons used to conduct the hallelujah chorus for his 80th birthday at the Sydney Opera House, the majority of the politician’s belongings will go under the hammer at Paddington RSL over the next two days.

A bidding battle is sure to be sparked on Saturday and Sunday with the sale, named Bob Hawke & Blanche d’Alpuget Mementos, Curiosities, Art and Design, expected to raise about $250,000. The original black and white photo of Don Bradman signed by the legend himself is expected to go for between $1,000 and $1,500, while the office chair he sat in day after day has an estimated selling price of around $200 to $400.

Though many may be dying to get their hands on some of the pieces it has sparked the question of how soon is too soon to part with a loved one’s belongings after their death. Blanche received a flurry of criticism last month when her plans to sell off Hawke’s items was revealed with many claiming they wouldn’t have even thought of it yet if they were in her position and would still be in mourning.

“Took me five years to even contemplate down sizing after I lost my husband,” a Starts at 60 reader commented on Facebook. “As for the seven week mourning period being over, I’m still grieving after almost six years and that will never change. While another added: “So soon, it’s sad when a partner dies and the other one decides to get rid of all their things.”

However, others supported Blanche in her decision with plenty claiming parting with a partner’s possessions after they have passed can actually help to move on and deal with the grief. “Comes a time to clear stuff, good for her. Grieve, clean, then dream of what’s next,” a Starts at 60 reader wrote on Facebook.

While a second commented: “She is wise at her age to do it sooner than later, as later she may not be able to do it physically or have the people close at hand as people do drop by the wayside. The grieving will still go on, just unencumbered.” And a third added: “Her and Bob probably discussed this before he died, everyone is different, some get rid of everything immediately others are still hanging onto everything for years after . She may well have discussed this with his family as they are friends.”

The announcement of the auction comes weeks the Federal Government’s $750,000 plans to buy and renovate former prime minister Bob Hawke’s childhood home in regional South Australia were revealed. Radio broadcaster Steve Price hit out at Prime Minister Scott Morrison’s idea to spend taxpayers money, calling it “ridiculous” and a “scandalous waste of money” during his segment on radio station 2GB.

Morrison announced the government’s plans to purchase the property in Bordertown, which lies around 270km south-east of the state’s capital Adelaide at the start of July. He claimed at the time they wanted to “protect its heritage value” and “commemorate his [Hawke’s] life and achievements”.

However, not everyone was on board with the idea, as Price voiced his clear disapproval of the plan following a chat with Tatiara Council Mayor Graham Excell. The local politician explained his joy at the government’s planned purchase of the property which he said is listed at around $300,000.

“It’s a way to preserve history,” he told Price. “Unless we preserve history of our heritage and towns, everybody would forget about it. “I’m quite pleased the government has recognised this as the birthplace of Bob Hawke.”

When asked about its current condition, Excell claimed the building – which was used as a Centrelink office – is in good condition having been renovated less than 10 years ago. “It’s listed value on the real estate markets is just under $300,000 so if the government have set aside $750,000 they must be going to spend a substantial amount on it to renovate it,” he added.

This didn’t sit right with Price who claimed the government should allocate the money to other projects instead of forking out a large sum on one building. “Is that not a scandalous waste of money?” he queried. “The house is $290,000, so you’ve got another $450,000 to spend, you could knock it over and build 10 houses. I mean that’s just ridiculous.”

When do you think it a good time to part with a loved one's belongings after their death? Have you had to make the decision to part with possessions?