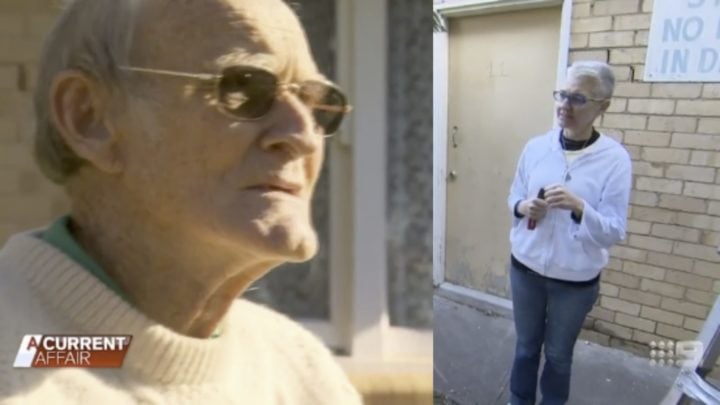 Peter Grundy has been trying for years to get his daughter to move out of his apartment. Source: Facebook/ A Current Affair

An elderly man is facing the fight of his life against his own daughter, having spent more than $70,000 over the past decade in an attempt to evict her from his own apartment.

At 84 years old, Peter Grundy wanted a relaxing and peaceful retirement, but instead its turned into a nightmare with all of his plans put on hold. His own daughter Katrina has been living rent-free in his Melbourne apartment, and despite her father’s request for her to move out, she has refused to budge.

Speaking to Channel Nine’s A Current Affair this week, Peter said that the “lovely little child” he once knew is long gone and he “can’t believe this is happening”. The retiree said he’s tried every legal avenue available to convince his 49-year-old daughter to leave his Melbourne apartment so that he can finally put it on the market, and use the money from the sale to move into a care facility in the small country town of Denilliquin, in New South Wales.

“I’m sure it has taken the bit of youth I had left in me,” Peter told A Current Affair. “I’ve got to pay up front in a retirement village more than I’d get for this house … I’m not entitled to a pension.”

However, Katrina seems to believe she can rightfully stay in the apartment, claiming her parents gifted her the property eight years ago – however this was thrown out by a judge. She’s even somehow managed to place a caveat on the apartment without Peter knowing, to halt any plans to sell the property.

“Very clever and very clever in legal terms – and solicitors and the barrister said – she’s someone I’ve never met the like of – she has an enormous capability to come up with things we never hear of,” Peter said.

Over the years Peter has spent more than $70,000 in legal fees to try get Katrina out of the apartment, and he’s lost a further $200,000 in rent, plus body corporate fees and rates. With so many avenues followed through by Peter, even lawyers are stumped as to what do next.

“The state of Victoria has no other mechanism available to him [Peter] to get her out – he’s followed through on everything he can do,” property lawyer Justin Lawrence told A Current Affair. “Yet she remains, and it seems every day she remains, it’s another day of injustice for him.”

But, the impact on Peter’s life hasn’t just been financial. The retiree told the show that his daughter has been physically abusive, even punching him at times. The family was so afraid for Peter that they took out an AVO against Katrina to protect him from being abused. And his son Adrian also claims to have experienced this abuse.

According to A Current Affair, Katrina allegedly assaulted her father and brother at the hospital while her mother Margaret lay in a coma on her death bed.

“She lashed out and hit me and then she shoved my father,” Adrian told A Current Affair. “She seemed to gain great pleasure from torturing Dad and using and abusing him … I think she’s just evil to the core.”

Meanwhile, it’s just a waiting game for Peter as he hopes desperately Katrina will soon be forced out of the apartment. According to A Current Affair a warrant remains out for her arrest in New South Wales –  it’s been three months since that warrant was issued. However, the Sheriff’s Office hasn’t responded to A Current Affair about when they plan to execute the warrant.

In one last message to his daughter Peter simply said: “Katrina you have disappointed both your late mother and myself enormously.”