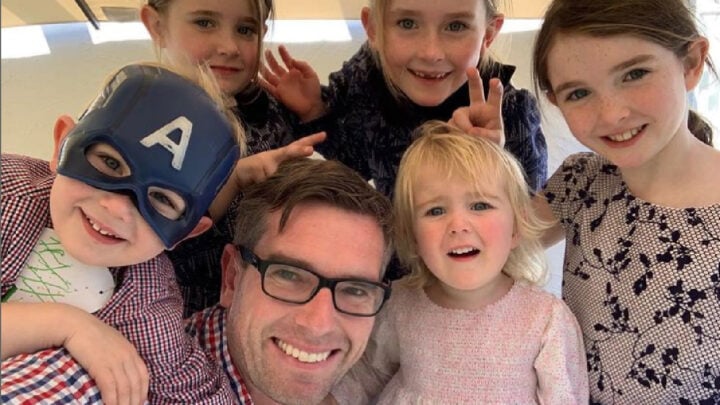 Dominic Perrottet with 5 of his children. Source: @dom.perrottet/Instagram

New South Whales Premier Dominic Perrottet has announced the birth of his seventh child with his wife Helen.

“Here she is!” Perrottet announced on social media.

“Both Mum and baby are doing well.

“She’s looking forward to being kissed and cuddled, fought over and cherished by her big brother and sisters.

“Special thanks to the incredible midwives who were with us every step of the way.”

The announcement was met with warm welcomes from members of parliament and the public alike.

“Welcome Celeste! Congratulations and best wishes to the entire Perrottet family, praying deep joy and peace for you all,” another wrote.

Perrottet announced late last year that he and his wife Helen were expecting their seventh child, the news was quickly met with hilarious reactions from the Australian public.

Perrottet joined in the fun, telling reporters during a press conference, “if anyone has a second-hand mini-van they want to sell, please contact my office.”

At the time the New South Wales Premier, 39 took to social media to reveal the “exciting family news” of what will be the couple’s sixth daughter.

“Our family photo wall is going to need another frame! Helen and I are thrilled to announce we have a little girl due next year,” he said.

“With five sisters already, William is looking on the bright side – more bench depth on the family basketball team.”

The state’s youngest ever Premier was also brought up in a large family of 12 children which he referenced during his maiden speech in Parliament.

“I had the privilege of growing up in a large family. I am the third of 12 children. As you may imagine, my mother ran a very tight ship,’’ he said.

“But with so many of us around, she realised very quickly she could not get everything done by herself. I polished 12 pairs of shoes in summer. I packed 12 lunches in autumn. I changed 1200 nappies in winter and then changed them again in spring.”

Leave your well wishes for the new arrival down below.