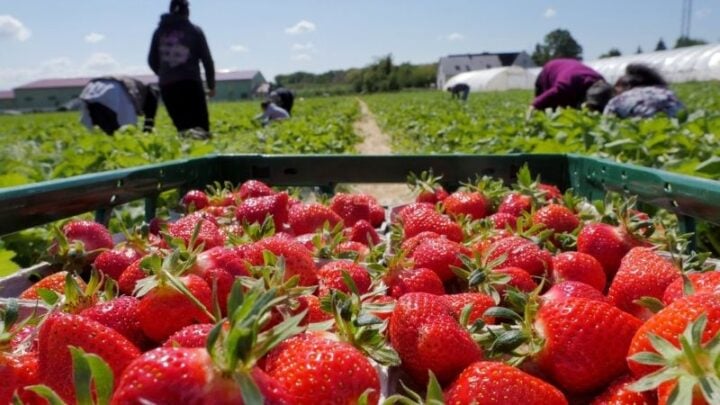 Refugees would have to do 12 months of labour in regional Australia according to the new proposal. Source: Getty.

With no official word on when Australia’s borders plan to reopen to internationals, farmers in regional Australia are left to worry about the worker shortage created by fruit picking backpackers who returned home only to be locked out of the country indefinitely. And unfortunately for Australia’s horticulture industry, no harvesting means no fresh fruit or vegetables up for sale.

So in an effort to fill the growing gap, the Refugee Council of Australia has proposed the government offer any vacant short-term harvesting jobs to the 17,000 people in Australia who are on two classes of refugee visas to provide them with an easier path to residency in exchange for their labour.

And in an optimistic turn for the council, the Sydney Morning Herald reported that several government and opposition MPs are now backing the proposal arguing that there’s a desperate need for people who are prepared to work in the harder regions.

“The idea to offer the chance to proven refugees in Australia to go bush and do this work in return for a permanent visa is worth backing,” Labor’s Julian Hill told the SMH. “If they do the right thing by the country and prove their commitment then we should embrace them in return.”

According to the Australian Fresh Produce Alliance (AFPA) normally there are approximately 200,000 backpackers in Australia however when the pandemic began this number stood at around 140,000. This has now reduced to just half with only 70,000 backpackers staying inside Australian borders with an average of 1,000 leaving per week.

With the numbers of applications for short-term harvest roles declining rather than inclining – Michael Rogers the CEO of the AFPA told Starts at 60 that growers are definitely open to any and all suggestions in this climate however, there could be some hurdles when it comes to replacing backpackers with refugees.

“It’s important that refugees go through the normal processes and that workers are supported and matched to jobs appropriately,” he said. “But one of the key challenges is that it’s seasonal and it often moves locations… This mobility is why backpackers traditionally suited the job.”

Meanwhile, the National Farmer’s Federation (NFF) suggested that rather than have refugees fill the labour gap, it should instead go to local Australian workers who have been displaced from their pre-pandemic jobs. The federation’s 10-point plan offered up immediate, short and medium term measures to attract Australian residents to farm work and kick off a controlled, Covid-safe restart to foreign worker visa programs.

“In an ordinary year, farmers rely on a combination of local and foreign labour to get the job done,” NFF CEO Tony Mahar said. “Ideally, this year we’d like to see Australians, especially those who have been displaced from their pre-pandemic jobs, fill roles performed by backpackers and seasonal workers, but the reality is more support is needed to attract the required number of local workers.”

This additional support would come in the form of having full access to essential amenities and entitlements while assuring workers they would be in a safe an support environment.

Do you think this is a good idea? What else do you think farmers could do?