Men vs Fashion: A brief and important guide to the mistakes most men make 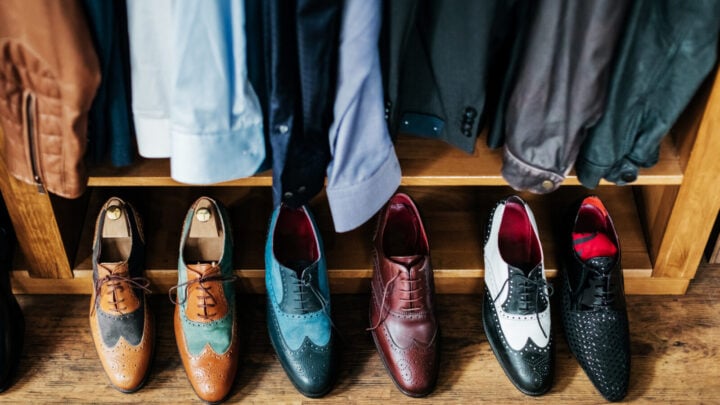 However disheveled or slovenly he might appear to the outside world, every man believes deep in his heart that he is a paragon of style and good taste.

There he stands before his bedroom mirror as he is about to head out, making minor adjustments here and there, thinking: “To heck with being Deputy Vice President of Creative at a graphics design company. I should have been a male model.”

This is one of the many delusions men carry with them.

Others include: the ability to control the course of a football game by screaming at the players from the back of the stadium; being able to fix plumbing problems without the need for a licensed expert or YouTube tutorial; suddenly knowing how to cook meat products because they are in front of a barbecue.

In some cases, a man’s impervious self-belief that he is, indeed, imbued with an instinctive sense of sartorial elegance holds up to independent scrutiny.

While women have achieved equality in many fields throughout history, they are way behind when it comes to fashion faux pas, a realm in which they simply cannot compete.

For a man will spend $600 on a pair of incredibly stylish shoes bearing the name of a world-famous fashion brand – and not bother to wear a $2 pair of socks.

Worse, a man will sometimes match his expensive shoes with a pair of novelty socks bearing smiley faces or cartoon characters, just to show what a cheeky and rebellious fellow he is.

Think of how that flies during a job interview, how the prospects of a lucrative corporate career can be instantly extinguished once the recruitment officer glances down at the shoes of a hopeful applicant, only to see Cartman from South Park staring back at him.

Do the men who like shaving the sides of their heads know that this particular haircut was especially popular amongst a certain group of angry young men in Germany during the 1930s? Haven’t they seen Schindler’s List? What do they say when they go to the barber? “Hey, Giuseppe! Lovely weather we’re having. Today, give me the Amon Goeth.”

Beards have gotten way out of control. Regular beards, no problem. But what is it that possesses an otherwise normal man to cultivate a shovel-shaped monstrosity that goes down to his navel and is so ill-suited to his head that adults and children alike find themselves pulling at it is the belief that the only thing attaching to his head is an elastic strap.

As for earrings – well, somebody’s gotta say it. Great on women, not on men. It ain’t a good look. Never has been, never will be. There.

This goes for earlobe studs, nose hoops, and those dagger-like piercings that travel all the way up the rim of the outer ear like a rabid dog’s collar. Wake up, guys.

Some men with moustaches like to fashion the ends of their growths into a pointy tip, usually with the aid of oil or wax.

This is a very swish look – if you’re a 19th-century magician, playing the villain in a pantomime or are an entrant in a Salvador Dali look-a-like contest.

Apart from the silly look, a Snidely Whiplash ‘stash can also be potentially costly once you get hit with a lawsuit from the person in the crowded elevator whose eye you’ve just punctured.

Should men wear jewellery? Sure – if they’re starring in a Godfather film or are running a house of ill-repute in a music video.

Necklaces, pendants, bracelets, and rings with giant rocks all look elegant on a woman, but on a man it merely makes him appear to have too much money and too little taste. As for all that clinking and clanging of gold chains and silver bangles, it creates quite the noise nuisance during early morning mass.

Yet of all the fashion mistakes a man can make throughout the course of his life, the saddest, sorriest, most pitiable venture is his decision to don the most dubious item in his wardrobe – the muscle shirt.

In a sensible world, the sale of muscle shirts would be restricted to those men who have earned the right to wear them.

These dedicated souls spend hours each day grappling with gym apparatus to build the type of physique that deserve to be displayed and admired.

Regrettably, 99.98% of muscle shirts are worn by men who have either never adhered to a strict regimen of working out or – more tragically – did so long, long, long, long ago and now wear muscle shirts in the dire hope of keeping alive the distant memory that their bodies once did not resemble a deflated beach ball.

We salute those men of style who can pull off a dashing look without looking like they’re making an effort. Kudos, gents.

At the same time, we weep for those innocent people who are forced to endure the fashion flubs committed by the common man on a daily basis – in particular, the cringe-inducing sight of a tight-fitting muscle shirt stretched over the torso of a man who believes he is Charles Atlas, but whose rolling contours suggest otherwise.