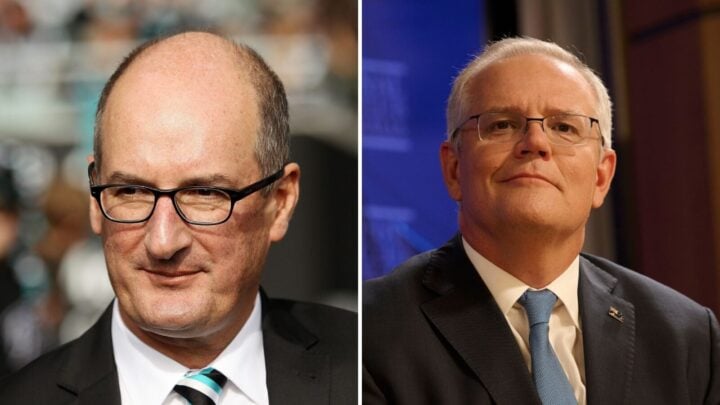 Sunrise host David Koch has clashed with Prime Minister Scott Morrison on-air after the Prime Minister didn’t play along with the morning show host’s attempt to end the segment on a “light-hearted” note.

Co-host Natalie Barr asked Morrison what his response was to the story about the Sydney council of Hornsby threatening to not empty a man’s bins over “anti-ScoMo” stickers on them.

“The stickers feature you holding a lump of coal in parliament with the words ‘bin him’ and ‘chuck him out’,” Barr said.

A Sydney council is refusing to collect a resident’s bins that have stickers featuring Scott Morrison plastered on them.

So, what does the prime minister think of the rubbish row? pic.twitter.com/b3SyvqLbN9

Morrison responded by pivoting the conversation back to talking about Australia’s unemployment rate.

“I will leave that to the mayor of Hornsby,” he said.

“What I’m focused on is ensuring our economic plans continues to work, we got unemployment down four per cent …”

“No David, not yeah, yeah yeah. This is serious stuff,” Morrison hit back.

“Getting young people into training, getting unemployment down, this is the stuff that matters.”

Koch retaliated: “It is serious, but you’d made the point earlier on that.”

“We’re trying to finish with something a bit light-hearted because the mayor of Hornsby, of course, is your old mate Philip Ruddock, former coalition minister,” he said.

Morrison countered with his signature smirk, saying: “Well sure, and I’m sure he’s more than capable of dealing with the bins.”

“I’ll let him (Ruddock) deal with taking the bins out,” he said.

“I’ll get on with strengthening the economy.”

Koch ended the segment with the final remark: “We all have to keep smiling.”

In an interview with 2GB radio, Ruddock defended his garbage bin threat saying the stickers should not go on “public furniture”.

“Political advertising should be done on private property,” he said.

“The bins are council property.

Dear @RNBreakfast,
cc @PatsKarvelas,
I live in Hornsby and I’m disappointed by the decision by Hornsby Council, cheerfully supported by Mayor Philip Ruddock re the “Bin Him” stickers on garbage bins. Disappointed but unsurprised. No sense of humour. #BinHim #ChuckThemOut pic.twitter.com/Nk18Pgv4Yh

Did you know you couldn't put stickers on your wheelie bins?