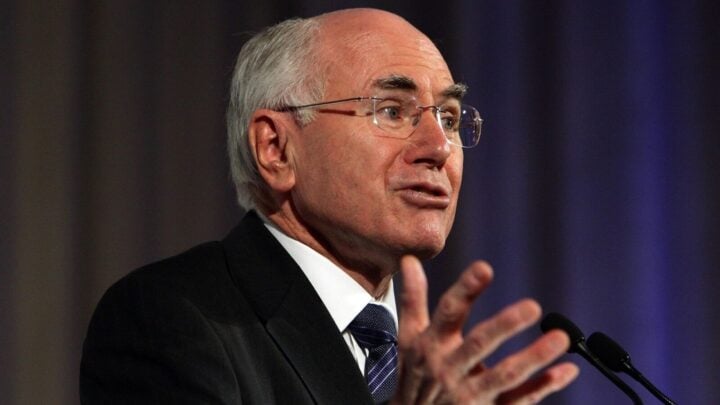 The former prime minister is now recovering well after his stint in hospital. Source: Getty.

Australia’s former Prime Minister John Howard is recovering in hospital after requiring emergency surgery on Monday for what has now revealed itself to be a case of appendicitis.

The news was confirmed by 2GB’s breakfast host Ben Fordham who sent a tweet out on Monday night confirming the incident. Howard, 81, reportedly suffered a “sudden attack of appendicitis” and visited his GP before being rushed to Sydney’s Royal North Shore Private hospital in an ambulance.

The message that was posted on Fordham’s twitter said he is now “recovering well” from his surgery and that he thanked everyone for their good wishes with particular thanks going to the staff at Royal North Shore Private for their excellent care.

People have taken to social media to share their well wishes with one writing: “Very happy to hear that you are ok, my dear John. You were a great and respectful leader of all time, we missed you I wish you comeback again, I hope you get well soon and all the best to you and family. Take care”.

This isn’t the first time Howard’s health has created cause for concern as he was also rushed to hospital back in 2015 after suffering a heart scare. The former leader was playing golf at the time when he began to experience tightness in his chest and was rushed to the emergency department to have two stents inserted.

The news of Howard’s hospitalisation was reported earlier on Monday in which the political editor at Sky News said he had spoken to the former prime minister and there was no cause for alarm with the Howard reportedly saying he was “fine”.

Howard’s stint as prime minister ran from 1996 to 2007 and he currently stands as Australia’s oldest living former prime minister. He also holds the title as the second-longest serving leader after Sir Robert Menzies.

Have you been following this story? Did you like John Howard as a leader?