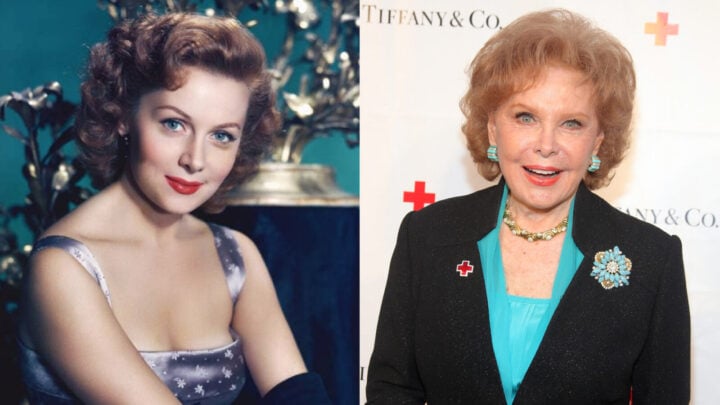 Hollywood great Rhonda Fleming passed away at the age of 97. Source: Twitter/ClassicActorsOfHollywood and Getty

Hollywood actress Rhonda Fleming, who starred alongside the likes of Kirk Douglas, Charlton Heston and Ronald Reagan in the 1940s, has died at the age of 97.

The talented star passed away on Wednesday in Santa Monica while in hospital, her longtime assistant Carla Spoon confirmed to The New York Times. She was best known as the red-haired actress who became a popular sex symbol in western films, as well as adventure movies, mainly during the 1940s and ’50s.

Rhonda appeared in over 40 films throughout her career, including A Connecticut in King Arthur’s Court, Gunfight at the O.K. Corral, The Great Lover, and Slightly Scarlet. She was also nicknamed the “Queen of Technicolour” because she photographed so well in that medium.

Her gorgeous red hair, green eyes and fair skin made her stand out from others – something which Rhonda later on claimed was a drawback.

RIP Rhonda Fleming. Technicolor loved her, but so did black-and-white. Especially tempting, elusive, and fascinating as femmes fatales, neurotics, and schemers. A great noir lady. pic.twitter.com/kZG5B6XJgs

Speaking to People magazine in 1991, the actress said the studios “never wanted more from me than my looking good and waltzing through a parade of films like The Redhead and the Cowboy” – a 1951 western movie she starred in alongside Glenn Ford.

But, there was far more to Rhonda than her acting and beautiful appearance, she also had an incredible singing voice and sang in some of her films, and later on stage in Las Vegas. She even went on tour.

Since news of her death broke tributes have flooded social media, with fans remembering Rhonda as a talented and beautiful actress.

I'm very sad to tell you that Rhonda Fleming, star of films such as Out Of The Past, Gunfight At The O.K. Corral, While The City Sleeps and more, has died at the age of 97. Another Classic Hollywood icon gone 🥺 RIP Rhonda ❤❤ pic.twitter.com/qdZPLzbLn7

“R.I.P. Rhonda Fleming. Technicolour loved her, but so did black and white,” @NitrateDiva wrote on Twitter. “Especially tempting, elusive and fascinating as femmes fatales, neurotics and schemers. A great noir lady.”

“I’m very sad to tell you that Rhonda Fleming, star of films such as Out of the Past, Gunfight at the O.K. Corral, While the City Sleeps and more, has died at the age of 97. Another classic Hollywood icon gone,” @CAOH110291 said.

“Rest in peace to Rhonda Fleming, one of the most beautiful redheads of the Golden Era,” @noir_or_never commented. While @MoonMoonlj simply added: “Any film with Rhonda was better for having her in it.”

Do you remember watching Rhonda Fleming in any movies? What was your favourite role of hers?