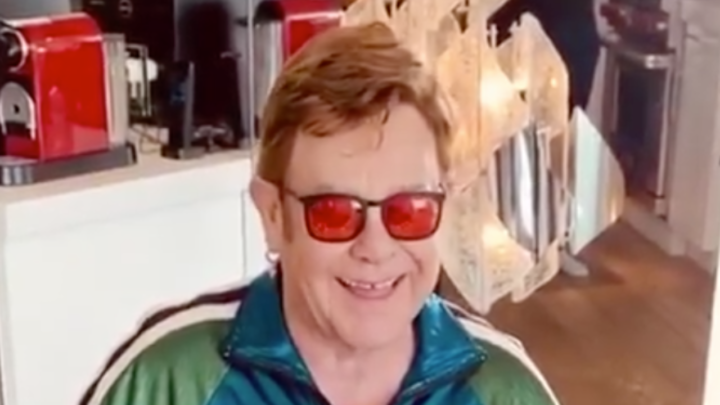 Elton John celebrated his birthday with his loved ones at home. Source: Twitter/ Elton John

The world may be in panic-mode as many countries continue to tackle the outbreak and spread of Covid-19 but Sir Elton John wasn’t going to let that affect his birthday this week, with the superstar dubbing his small family celebration the “best ever”.

The pop icon took to social media this week to share a snippet from the joyous day with partner David Furnish and his two adorable sons Elijah and Zachary. The sweet home video posted to Twitter showed Elton and his kids gathered around an extravagant birthday cake singing happy birthday together.

Elton could be seen smiling happily at his children as they sung out “Happy Birthday Daddy”, before blowing out the candles perched on top of the cake. “Tah dah!” the now 73-year-old yelled, to which his kids let out adorable giggles.

Grateful for the best birthday ever with my family 🙏🏻❤️🎂🚀

“Grateful for the best birthday ever with my family,” Elton wrote alongside the video on Twitter.

Fans were quick to send their best wishes to the star, with many commenting how adorable it was to see Elton celebrating with his children.

“Laughing. You’re not supposed to sing your own birthday song,” @CAMontgomery1 wrote. “What a great gift to be loved so much by your children. The laughs are precious!!”

It’s only been a matter of weeks since Elton left Australia after months touring the Land Down Under with his family as part of his farewell tour. The talented singer had been in the country since November, performing right across Australia and even taking to the stage while battling with his health.

Earlier this month, after performing his final show, the star bid farewell to the country, admitting it had “stolen his family’s heart”. Taking to social media, Elton said they were grateful to have been welcomed so warmly into the country, and were sad to say goodbye.

“We want to say a huge thank you to EVERYONE who has welcomed our family so warmly,” he wrote on the Instagram post. “From the waves at Bondi Beach to the breathtaking beauty of the Great Barrier Reef, our sons have learned so much about this beautiful country.

“It’s been the trip of a lifetime and an experience we will treasure and never forget.”

Elton also shared a series of photos of his kids Elijah and Zachary, along with his husband David experiencing all the things Australia has to offer. His sons could be seen getting up close to koalas and kangaroos, while in other snaps they take in the sites of Sydney.

Do you have a message for Elton John for his birthday? Have you seen him perform?