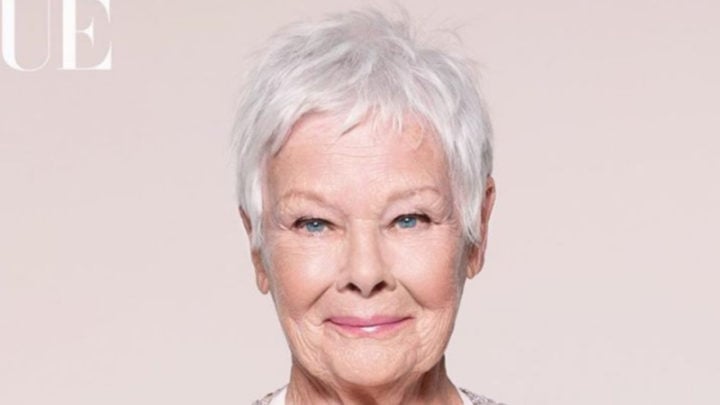 Judi Dench was selected to be the cover star of June's issue of British Vogue Source: Instagram/ British Vogue

Dame Judi Dench has made a name for herself as one of the most iconic and successful actresses in Hollywood, and now she has added another accolade to her resume by becoming the oldest person to ever grace the cover of British Vogue magazine at the age of 85.

The actress, whose career spans an impressive six decades, appears on the cover of June’s issue of the glossy fashion magazine, beating out Jane Fonda to become the oldest cover star. Last year Fonda appeared on the front of the magazine at the age of 81 but, at four years her senior, Dench has now claimed the title.

Several of the photographs have been shared on social media, ahead of the magazine hitting shelves, and fans of the star were blown away by Judi’s appearance, as she showed off her natural and timeless beauty.

Sporting her signature cropped hair-do and wearing a colourful floral ensemble, fans praised the magazine for breaking boundaries with Judi’s appearance on the cover. The simple yet striking photo showed Judi clutching at the collar of a bold floral shirt, with a subtle knowing smile spread across her face.

Several others photos from the Cats star’s shoot were also shared by the magazine, including one of her donning a show-stopping kimono-style jacket, with rows of silver diamantes adding a touch of glamour to the classic ensemble.

Dench also sat down with the magazine to answer some questions about her life, covering her illustrious career all the way up to her time in self-isolation recently. And when the topic of retirement was brought up, the James Bond star was adamant that is a long way off, with no chance of her slowing down any time soon.

Meanwhile, Dench also touched upon how she has been coping in self-isolation amid the ongoing Covid-19 pandemic. The star said she hasn’t been able to see her family during this time, but is using technology to stay in touch and is keeping busy with personal projects.

“I am disciplining myself to learn all the sonnets,” she told British Vogue. “I try to learn something new every day, anything.”

Fans have since praised the magazine for featuring Dench on the front cover and said they can’t way to grab a copy and read all about her journey.

“I need to buy me a copy, I’ve loved all things Judi since growing up and watching clips of her acting in Shakespeare and the classic TV show ‘As Time Goes By’,” @jjrand wrote on Instagram. “Still watching till this day to cheer me up and keep me going during these uncertain times of isolation.”

“I love the legend that is Judi and this,” @lalalemonada added. While @taylorsteesuk said: “Judi Dench, what an amazing woman and superb actress. A real British icon.”

Are you a fan of Judi Dench? What's your favourite movie or TV show she's starred in?