‘What a joke!’ Outrage as trucker jailed for just 22 years for killing 4 cops 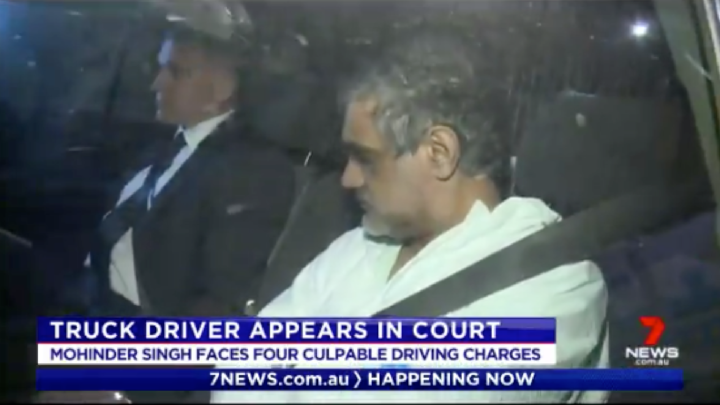 People are calling for disgraced truck driver Mohinder Singh’s prison sentence to be significantly extended — if not changed to life imprisonment — after the 48-year-old, who killed four police officers on Melbourne’s Eastern Freeway last year, was handed a 22-year sentence on Wednesday morning. He must serve at least 18 years and six months behind bars before he is eligible for parole.

Singh was short on sleep and high on the illegal drug ice when he crashed a 20-tonne semi-trailer into four officers who had pulled over a speeding Porsche 911 on April 22 last year. Constable Lynette Taylor, Senior Constable Kevin King, and constables Glen Humphris and Josh Prestney died at the scene. Porsche driver Richard Pusey, who’s in police custody as he awaits his sentence on April 28 after pleading guilty to outraging public decency and other charges, was urinating at the side of the road when the horror crash occurred. He later filmed the officers while they were dying and then fled the scene on foot.

Justice Paul Coghlan said the footage of the crash showed the four officers had no hope. “I have watched the footage on a number of occasions — it is chilling,” he told the court on Wednesday, news.com.au reports.

“The police officers had no hope. In my opinion he was able to reason with … the specific conduct of driving a heavy truck while fatigued and (high on ice) … was wrong.”

He went on to say that Singh was “selfish” for getting behind the wheel in such a state. “You were simply unfit to do the job and had little legitimate claim to keep your position,” Coghlan said. “In the sense you drove to keep your job, that decision was selfish.”

According to the news outlet, during a pre-sentencing hearing last month, prosecutor Brendan Kissane QC said the trucker was so affected by drugs leading up to the crash “he couldn’t even speak”. The court also heard Singh “smoked, snorted and injected ice”.

Melbourne Magistrates’ Court previously heard claims from Singh that he couldn’t sleep in the days leading up to the horror crash as he saw “a witch” and the witch “put a spell on him”.

Fellow Australians have since taken to social media to comment on Singh’s sentencing, with the majority saying 22 years wasn’t anywhere near enough, considering he took four police officers’ lives.

Twitter user @kyliehiggss questioned, “Is that it? Only 22 years.” While @elpeak wrote, “Pathetic. Should never be eligible to be released.”

Twitter user @DavidNorth2 said five and a half years for each life “just doesn’t seem right”, while @CarlsCarla said, “Seriously Mohinder Singh gets 22 years for 4 police officers lives? Our legal system is a joke.”

Have you been following this story? What are your thoughts on this sentence?