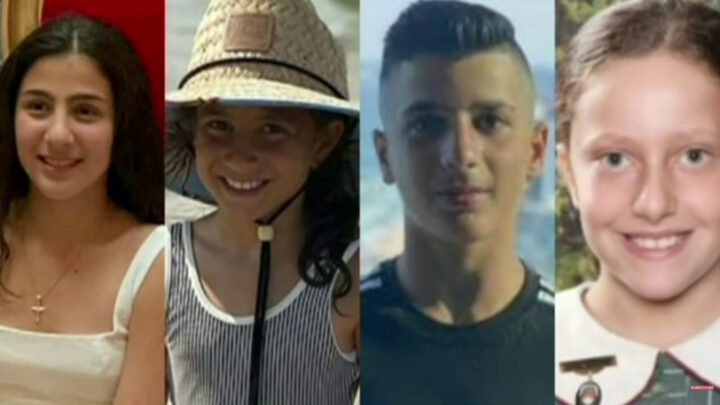 Siblings Antony, 13, Angelina, 12, and Sienna Abdallah, 9, and their cousin, Veronique Sakr, 11, died at the scene of the Oatlands crash in 2020. Source: Youtube/7News

The drunk and drug driver responsible for the deaths of four children in Sydney’s West has been sentenced to 28 years in prison.

Samuel William Davidson was found guilty for the deaths of siblings Antony, 13, Angelina, 12, and Sienna Abdallah, 9, and their cousin, Veronique Sakr, 11, who died at the scene of the crash in Oatlands in February 2020. Davidson was sentenced on Friday and will be eligible for parole in 2041.

Following the verdict the father of three of the children killed in the crash, Daniel Abdallah, read an emotional statement to the media, and called into question Australia’s culture around drugs and alcohol.

Abdallah said that the sentencing was “another milestone in our journey of grief”.

“We will all have our hearts broken until the day we take our last breath and no sentence can help ease that pain,” he said outside court. “Where my disappointment lies is the way our culture loves drugs and alcohol. That’s where my frustration is, more than the driver.”

Veronique’s mother, Bridget Sakr said that there “are no winners from today’s outcome, only losers”.

“No court or sentence term issued can ever compensate for what we’ve lost,” she said.

In court on Friday, Judge James Bennett read a letter of apology from Davidson to the victims’ families. According to ABC News, Davidson wiped away tears at times throughout the hearing.

“I am so sorry for what happened and what I did to your wonderful family,” the letter said.

The fatal crash occurred in February 2020, when Davidson lost control of his ute while excessively speeding, mounted a kerb, and hit a group of seven children.

On the day of the crash, he had spent more than 12 hours drinking, and was three times over the legal limit when he hit the children. He also had cocaine and other drugs in his system.

Following the crash, he was charged with a total of 20 offences in relation to the incident. He, along with a 24-year-old passenger, was not harmed in the incident.

A police spokesperson said at the time: “The driver, a 29-year-old man, and a 24-year-old male passenger were uninjured. The driver was subjected to a roadside breath test and returned a positive result.

“He was arrested and taken to Castle Hill Police Station where he was subjected to a breath analysis which allegedly returned a reading of 0.150. He was also taken to hospital to undergo mandatory testing.”

Is 28 years enough for taking away four children's lives?