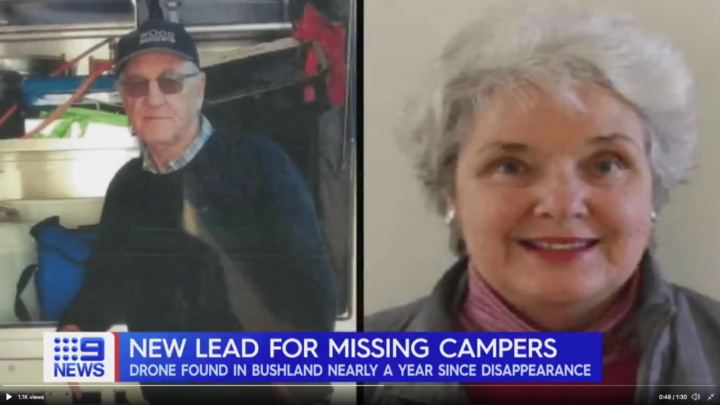 A new clue has emerged in the search for two Victorian campers missing for almost a year in a remote valley. Source: Twitter/@9newsMelbourne

Update Tuesday afternoon: Police have confirmed a drone found in the search zone for missing campers Russell Hill, 74, and Carol Clay, 73 is not the device that went missing with the couple.

Detectives had been investigating whether it was Mr Hill’s missing drone, hoping it may lead to a breakthrough in the mysterious case, however the Missing Person Squad have determined it was a different device.

“Despite this, investigators will continue to analyse the drone to determine its origins,” police said.

Tuesday Morning: A new discovery has emerged in the search for missing campers Russell Hill, 74, and Carol Clay, 73. A drone has been found in the search zone for the missing pair, who vanished in the Victorian Alps almost a year ago.

Hill and Clay haven’t been seen or heard from since late March 2020, after they seemingly vanished without a trace while camping in Victoria’s remote Wonnangatta Valley.

The drone was handed into Victoria Police over the weekend, and while police have not confirmed if the drone belonged to the pair, investigators were told Hill took his DJI Mavic drone with him.

Victoria Police confirmed detectives from the missing persons squad received an item that was handed in to them over the weekend.

“The item is being reviewed to determine if it has any relevance to the investigation,” a spokeswoman said. “The investigation remains ongoing and as such it would be inappropriate to comment any further at this time.”

The new information comes just days after police revealed they were searching for an unknown white dual-cab, which was parked near the campsite. Police hope that those travelling in the ute may have some information to assist investigators in the mysterious disappearance.

“We understand that this vehicle was parked near the long drop toilet, or the public toilet, and a small suspension bridge over the … river, which is within fairly close proximity to where we know that Russell and Carol camped,” said Detective Inspector Andrew Stamper, who leads Victoria Police’s Missing Persons Squad.

It is understood the ute is the only car that visited the area on March 20, 2020, that has not been identified and could be a major clue in solving the case. “It might seem like only a very small possibility that those in the white ute will have information about Russell and Carol’s disappearance, but we can’t afford to leave any stone unturned,” Stamper said.

Hill, who has been married to wife Robyn for 50 years, left his home in Drouin on March 19, and picked up Clay from her home in Pakenham in his white Toyota Land Cruiser. Hill made contact with his wife using a high-frequency radio on March 20, however, that is the last time anyone heard from either of them, with their mobile phones gone.

It is believed the pair went away together frequently and were expected to return home on March 28 or 29. But one week later, on March 27, a group of campers discovered the missing pair’s burnt-out campsite and tent and the police investigation was launched.

Initial theories included the suggestion that the companions may have staged their own disappearance to begin a new life together, but Stamper believes there was “no reason for them to do that”.

In June 2020, Stamper told A Current Affair that he believes a third party was involved in the disappearance and confirmed that Hill and Clay are suspected to have met with foul play. “We would have found them by now if they were still up there,” he said. “The strongest theory is that it’s something that’s happened in the valley that has escalated and resulted in something bad happening to them.”

What do you think happened to the missing campers?