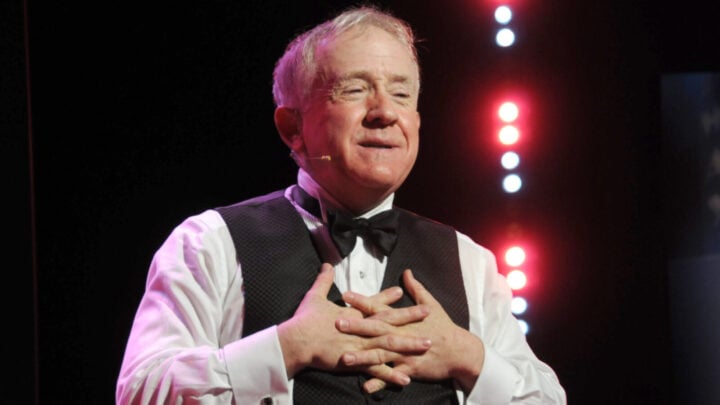 Hollywood and a sea of adoring fans were left in a state of mourning after the beloved actor and comedian Leslie Jordan, who was well known for his scene-stealing appearances in Will and Grace and Hearts Afire, died at the age of 67 on Monday, October 24.

Jordan was reportedly involved in a fatal car accident after suffering from a medical emergency, according to TMZ. A representative for Jordan confirmed his passing in a statement, stating that “the world is definitely a much darker place today without the love and light of Leslie Jordan.”

“Not only was he a mega talent and joy to work with, but he provided an emotional sanctuary to the nation at one of it’s most difficult times,” the statement read.

“What he lacked in height he made up for in generosity and greatness as a son, brother, artist, comedian, partner and human being.

“Knowing that he has left the world at the height of both his professional and personal life is the only solace one can have today.”

His most iconic role, however, came as Beverly Leslie on the hit sitcom Will and Grace which not only made Jordan a fan favourite of the show’s large fanbase but also secured the actor an Emmy Award for Outstanding Guest Actor in a Comedy Series at the 58th Annual Primetime Emmy Awards in 2006.

Given that Jordan’s role in Will and Grace brought him considerable fame it seemed only fitting that the stars of the hit series were among the first to deliver their heartfelt tributes to the late entertainer.

Debra Messing, who played Grace in the series, claimed that the “whole world has dimmed” in a tribute to Instagram.

“The joy & delight you have brought into my life has been a beautiful gift,” she wrote.

“I wish I had the words.

“Fly with the angels, friend. And sing, sing, sing.”

Eric McCormack, who portrayed Will in the series, was “crushed to lead about the loss of” Jordan who he called the “flirtiest southern gent” he had ever met.

Crushed to learn about the loss of @thelesliejordan, the funniest & flirtiest southern gent I’ve ever known. The joy and laughter he brought to every one of his #WillandGrace episodes was palpable. Gone about thirty years too soon. You were loved, sweet man. ????

My heart is broken. Leslie Jordan was one of the funniest people I ever had the pleasure of working with. Everyone who ever met him, loved him. There will never be anyone like him. A unique talent with an enormous, caring heart. You will be missed, my dear friend. ????❤️ pic.twitter.com/RNKSamoES0

Megan Mullally, who shared many scenes with Jordan in the series, said she was left in a state of disbelief after learning of Jordan’s passing.

“My heart is breaking,” she said.

“I really can’t believe it.

“Leslie Jordan was, hands down, one of the greats. People use that expression a lot, and I’m not sure it’s always applicable. There aren’t that many people who are truly great at anything. but Leslie was flawlessly funny, a virtuoso of comedy. His timing, his delivery, all apparently effortless. You can’t get any better than that.

“And what a friendly, fun-loving, dear person.”

The heartfelt tributes were not only relegated to the stars of Will and Grace, as entertainment heavyweights far and wide honoured the late Jordan while sharing treasured memories of the performer.

Queen of Country, Dolly Parton, collaborated with Jordan on a gospel album in 2021 and said she was left “hurt and shocked” by his death.

Star Trek star, George Takei, was left “stunned” by the death of Jordan, telling his followers the late actor will be missed for his “mirth” and “inimitable spirit”.

I am stunned at the death of Leslie Jordan, who delighted us with his many roles on television and film. The cause of death was a car crash after he suffered a medical emergency. Leslie, we are heartbroken at your loss and will miss your mirth and your inimitable spirit.

Wonder Woman star, Lynda Carter, said it “feels so cruel that this could happen to such a beautiful soul” after hearing of Jordan’s death.

Leslie Jordan put a smile on the faces of so many, especially with his pandemic videos. What a feat to keep us all laughing and connected in such difficult times… It feels so cruel that this could happen to such a beautiful soul. https://t.co/JKj2t8Km7A

They broke the mold when they made Leslie Jordan. He was a dear mentor and a beloved friend. I will miss him so much – it’s unimaginable that he’s gone. Rest well, sweet buddy. pic.twitter.com/c9kN0vkxyM

Rest in Peace my sweet friend. Your beautiful energy lit up every room. @thelesliejordan ❤️ pic.twitter.com/rgNpe9nbEJ

I just heard about Leslie Jordan. This is unbelievably tragic. He was such a light. Sending love to his family and friends.

From the first time I saw him on an episode of Murphy Brown in 1989, he was hysterically hilarious. So grateful for the 33+ years of laughter from this deeply gifted man. Thank you Leslie Jordan. ????#RIP ????
https://t.co/RvpNJoz8Zt

US actress Marlee Matlin said Jordan “was such a pleasure to work with” when they featured together on Reasonable Doubts.

I’m so sad to read the news of Leslie Jordan’s passing. He was such a pleasure to work with on my first TV series, Reasonable Doubts. He was at the top of his game and had so much to look forward to. He exuded JOY and LAUGHTER. RIP dear Leslie #LeslieJordan pic.twitter.com/WgmTZjEReG

Star of The West Wing, Allison Janney, thanked Jordan for his “humour” and “kindness”.

Oh Leslie, you brought such a light into all of our lives. Thank you for all of your stories, your humor, your kindness, joie de vivre and your friendship. RIP my friend????#lesliejordan Photo: #millermobley pic.twitter.com/83WKDE6BaI

Jordan is survived by his younger twin sisters, Jana and Janet.