‘The catch of the day’: Jacinda Ardern’s fiancé pens loving message to partner 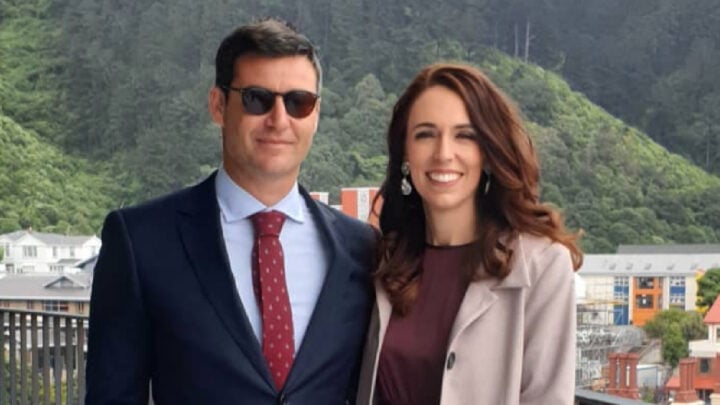 Clarke Gayford took to social media to pen a sweet message to his partner New Zealand Prime Minister Jacinda Ardern as she was sworn in for a second term in the top position. Source: Instagram/ Clarke Gayford

Jacinda Ardern’s fiance Clarke Gayford has penned a sweet tribute to his partner as she was sworn in for a second term as prime minister of New Zealand this week.

On Friday Ardern was formally appointed prime minister again, while her ministers were also sworn in during a ceremony in Wellington. To mark the special occasion Gayford took to social media to praise his partner, admitting sometimes he can’t believe he’s lucky enough to share a life with Ardern.

“Was nice having both our families in town for the official appointment of the new government this morning,” he wrote in a post on Instagram alongside a gorgeous photo of himself with his beautiful partner. “While the last three years have been a bit of a blur there are still moments like this where I wonder how on earth I ended up here hitched to the @jacindaardern express.”

The sweet message received an influx of comments from followers who agreed he had “hit the jackpot” with Ardern and they are both lucky to have each other.

“You hit the jackpot, plus you make a great team,” @leaniebombeanie commented on the post. “Aotearoa is lucky to have both of you at the helm.”

While @sandralepper said: “Awesome pic, lucky Neve with such fabulous parents. A really neat couple.” And @msliz.dobson added: “She’s the catch of the day!”

Meanwhile, Ardern have a passionate speech at the ceremony on Friday as she addressed the ministers who form the new government. Speaking in Wellington the prime minister said they make up a team with varying perspectives, talent and experience.

“As a team this group of people have been described in many different ways,” she said, according to The Canberra Times. “I say simply that sitting at this table is Aotearoa New Zealand.

“They collectively represent a range of different perspectives. They represent huge talent. They represent a broad set of experiences. And as you would expect in any time of crisis as New Zealanders, they have a huge commitment to serving this country.”

The prime minister also took to social media as the team quickly got back into work following the ceremony.

“And we’re straight into it!” she wrote on Instagram. “Cabinet was sworn in at 11am and we met at 2.30pm. Started with the tradition of a quick photo, one of the rare occasions we have cameras in the cabinet room.”

Ardern added: “Privileged to be back here and working with this team.”

Are you a fan of Jacinda Ardern? What do you think of Clarke Gayford's sweet message?