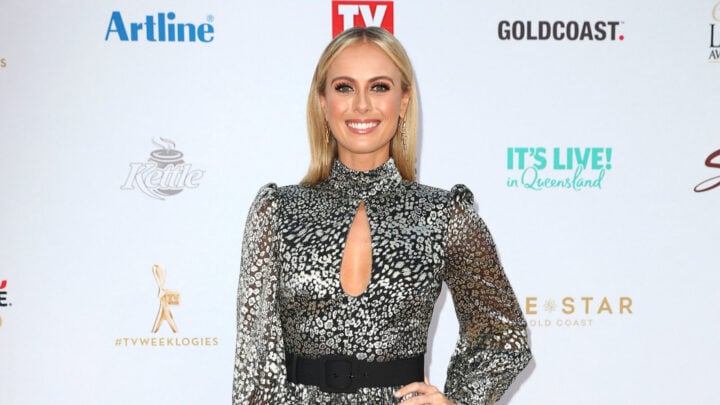 The popular news presenter welcomed Oscar into the world in February. Source: Getty.

It’s not easy being a new mum, especially in the middle of a global pandemic. And it was no different for Today news presenter Sylvia Jefferys, 34, who spoke candidly about her experiences welcoming her first child Oscar into the world earlier this year alongside her husband and fellow journalist Peter Stefanovic.

Speaking to Sydney Morning Herald’s Sunday Life Magazine, Sylvia revealed that at nine weeks old, Oscar, who’s now six months old, suffered an infant health scare in the midst of the pandemic lockdown. While she chose not to reveal the nature of the condition, she did say that the lockdown added “an extra layer of anxiety” as a new mum.

“As soon as things started shutting down and GPs were only taking people in an emergency, I started worrying about how I would get care for Oscar if something happened,” she said. “You jump at every noise they make when you’re a first-time parent. Everything can raise some level of anxiety … and when you don’t have other family members looking on, it can be really hard to feel your way through it.”

Gosh I love this cheeky, busy little boy. 📷 snapped by @peter_stefanovic on set with @sundaylifeau 💫 Link to the article in my stories.

And although the popular Channel Nine presenter admitted she’s actually enjoyed the ability to immerse herself entirely in the “newborn bubble” without worrying about missing out on anything amid lockdown, it’s been hard without regular visits from the grandmas. But now with the borders reopened between NSW and Queensland, Sylvia and Peter quickly made the dash to visit extended family residing in Cairns and Brisbane.

Luckily, they still have support in their Sydney residence as she said her family remains close with Peter’s brother and fellow Today host Karl Stefanovic. Karl, 45, and his new wife Jasmine Yarbrough, 36, recently celebrated the birth of their daughter Harper in early May.

“It’s very special to share this ride with Jasmine and Jenna [brother-in-law Tom Stefanovic’s wife] and particularly lovely for the boys’ mum, Jenny. My brother and his wife Aki also welcomed a little boy, Kenzo, 10 days after Oscar arrived. So it’s raining bubs on both sides.”

Sylvia then went on to credit her mother Janine for all the sacrifices she made as a single working mother raising three children. She said that although money was tight, her mother always valued education and encouraged the kids to seize every opportunity that came their way.

“Mum’s so emotionally invested in everything she does,” she said. “She was carrying a big load with her work and then coming home to three kids who were probably not consistently angelic.”

Last month, the star-studded couple took Oscar on his first trip away as the coronavirus restrictions started to ease up. The young family headed to the beach for the weekend sharing a series of photos from the weekend, one of which showed a doting dad holding baby Oscar.

Commenters gushed over the gorgeous snaps with one writing: “What a handsome little man”. Meanwhile, fellow news presenter Lisa Wilkinson who was previously a Today host for a decade alongside Karl shared some words of encouragement writing: “Beautiful pics honey. Hope he slept well, because, you know…sleep!!”

Do you think it would be hard to raise a child amid the pandemic?