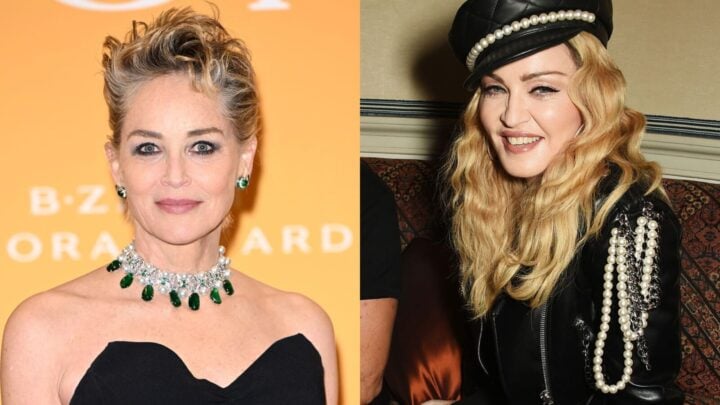 Sharon Stone and Madonna sure know how to cause a stir on social media.

In the photo, the blonde duo are snapped smiling at the paparazzi with their arms around one another.

Stone rocked a shaggy pixie cut with full bangs and is wearing a simple plunging black gown, with gold and black sequencing just below the bust.

Next to her, the Material Girl singer is rocking a black beaded gown that featured a deep v-neckline, cold shoulders, and long sleeves with silver beads dangling from the ends. She is also wearing a black chunky leather belt cinched at the waist.

Her long blonde hair is kept in an updo with her long fringe kept in front in soft waves. She completed her look with a three-layered diamond necklace, matching diamond dangling earrings and a silver bracelet.

The throwback has received a slew of comments from fans of both women.

“Two absolutely iconic beautiful women who’ve changed the world. Both unstoppable. I have always been inspired by your ability to break boundaries. I am continually learning… trying to break my own boundaries in making whiskey. And a Whoo Hoo for being badass moms !! Congratulations to two amazing mentors,” one user commented.

“BIGGEST CRUSHES from my teenage years!” said another.

While others have called the shot “perfection in one pic” and claimed the women are”two beauty and art icons.”

This wouldn’t be the first time either Hollywood star has caused a tizzy on social media, just last month Stone sent fans into a frenzy after showing off her body in a topless bikini snap.

The actress had captioned the provocative shot “Gratefully Imperfect on a Perfect Day” and received an outpouring of praise from celebrities and fans alike, who called Stone a “goddess”.

The raunchy singer, who has built a four-decade career on being provocative and controversial, had the internet rolling its eyes after she shared a series of extremely risqué photographs on her Instagram account.

Madonna is also currently working on a biopic on her life, announcing last September 2021 that she was co-directing and co-writing the forthcoming film, which she called a “visual autobiography.”