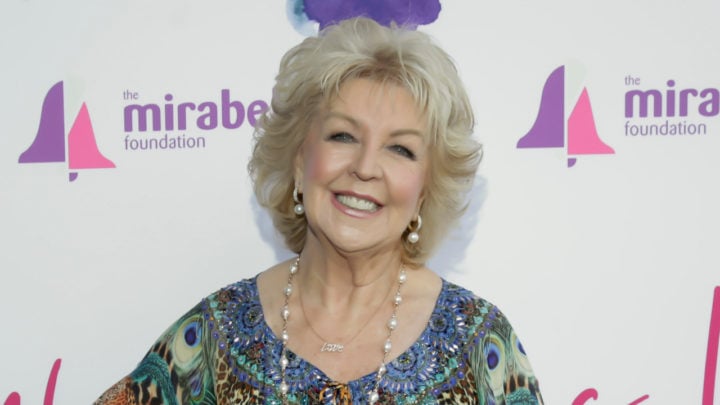 Patti Newton has been confirmed to appear on upcoming show The All New Monty: Guys and Gals. Source: Getty

Patti Newton is preparing to undress and bare all to help raise money for charity in a new season of a television series due to hit screens next month.

Rumours have been swirling the past week that the wife of iconic television icon Bert Newton would be joining the cast of Channel Seven’s The All New Monty: Guys and Gals, after a teaser of the show was released. In the promo a woman can be heard saying, ‘I’m from a showbiz family, I’ve been in show business for years, can you believe what I’m about to do?'”

Up until now, it’s been nothing but speculation, but on Friday morning the news was confirmed, with entertainment reporter Peter Ford spilling the gossip that Patti would indeed be stripping off in the name of charity to help raise money for breast and prostate cancer. Appearing on the Morning Show in the lead up to the show, Ford said there’s “been a bit of a guessing game going on,” but he could finally reveal who the mystery celebrity was.

'The All New Monty: Guy and Gals' is coming soon to @Channel7! Will a member of the Sunrise Family dare to bare all..? 😉 pic.twitter.com/VhpWZYP3kD

“Did you get it?” he asked hosts Larry Emdur and Sally Obermeder. “It’s Patti Newton!”

Both presenters were surprised by the revelation, but Ford said she’s definitely “getting it together and getting it off for the show”. He said with her background in show business and performing skills, she was the perfect pick for the program.

“As a kid, she trained as a dancer, so she’s got the moves still, and she’s the sassiest grandma in town, so that’s going to be a lot of fun in a few weeks!” Ford said. To which Emdur replied: “That’s great! Please tell us Bert is joining the male version as well?”

However, unfortunately, Ford couldn’t give away too many other details and said his “lips were sealed”. “Not this year! But who knows what the future may bring us,” he said.

The news comes after reports by The Daily Telegraph that Patti would join the cast of the show, alongside singer Danielle Spencer and former Home and Away actor Orpheus Pledger. While details on whether Spencer and Pledger would be appearing on The All New Monty: Guys and Gals are yet to be confirmed, two other stars have been confirmed to take part – Better Homes and Gardens presenter Adam Dovile and Home and Away actress Sam Frost.

Are you planning to watch the show? Do you think you'd ever be brave enough to bare all for charity?