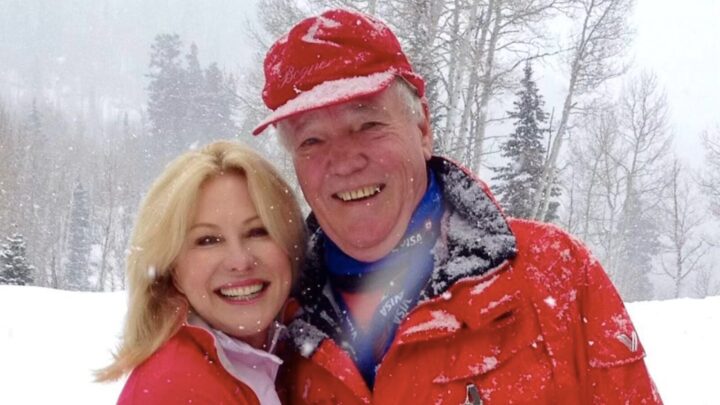 Dealing with the loss of a loved one is never easy, and for Australian television personality Kerri-Anne Kennerley, moving on from the grief that came after the death of her husband is still something she struggles with today.

In a new interview with Daily Mail Australia, Kerri-Anne opens up about life following the passing of her beloved husband, John Kennerley, in 2019.

The couple were married for 35 incredible years, after tying the knot in August 1984 with a lavish ceremony at the iconic Sydney Opera house.

Their blissful marriage turned into a nightmare when in 2016, John became paralysed from the neck down following an accident at a Coffs Harbour golf course. He was 75 at the time.

Kerri-Anne cared for him in the years that followed, all the way up until his sudden death in February 2019. Now, three years later the star admits she still misses everything about John.

“You know, the little things, the big things. There’s not a day… But as the years go by, I think it is ever so slightly easier. [But it] doesn’t make it any less lonely,” she tells Daily Mail Australia.

When asked if there was a time during John’s life that she cherishes the most, the 69-year-old said there was a “million” of them but goes on to say the memory she holds closest to her heart was their simple Sunday mornings.

“I always got breakfast in bed on Sunday morning with fresh squeezed orange juice and hot toast because I hate cold toast and eggs,” she recalls.

“And we just sit there and read the papers and discuss stuff about the world. You know, that really comfortable home time.”

Though lonely at times, the former TV presenter says her “fab friends and family” have been a great support network through the tough times.

I have sensational friends who are very attentive and include me in lots of stuff, ” she says, adding that is also “very, very close” to her sister and brother-in-law.

Since Jonh’s passing, Kerri-Anne has been a staunch advocate for older Australians who have become disabled.

Back in 2021, she appeared on Channel 9’s A Current Affair claiming she was going to take legal action against the National Disability Insurance Scheme (NDIS) because they “discriminate” against older Australians who become disabled.

Because John was 75 at the time of his accident, he was not eligible for the NDIS schemes, as applicants have to be Australian citizens aged between seven and 65 years old.

Instead, John was put on to the My Aged Care package. Under that scheme, John received just 10 hours a week of care and anything further needed to be paid.

“I want to sue the government … until it happens to them, nobody is aware of this. Who would have thought that somebody is not entitled to care because of a catastrophic accident at no fault of their own … that they cannot be looked after properly,” Kerri-Anne had said on the show.

“[The care provided] didn’t even scratch the surface.”

A year later, Kerri-Anne was encouraging people to sign a petition asking the federal government to fund “ground-breaking” research by SpinalCure Australia for their new treatment of spinal cord injuries.

At the time Kerri-Anne conveyed to Sunrise the “shocking and horrible” feeling she experienced while watching her husband lose his ability to move.

“Anybody who has been in that position of watching a person they love almost disintegrates, not being able to push a button, work a remote, feed themselves, dress themselves, knows that it’s 24/7 care,” she said.

“Its’ shocking, it’s terrible, but people live through it.”

Outside her mission to bring more attention to spinal cord treatment, Kerri-Anne has been spotted rocking the red carpet with show-stealing looks and keeping the news of any possible future romances a mystery.