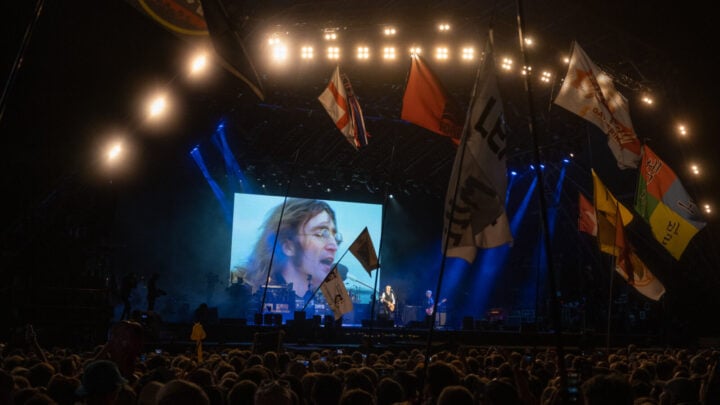 Julian Lennon decided to give the video a go and found that he "actually enjoyed it". Source: Getty Images.

The son of late Beatles icon John Lennon has spoken out about how he was initially “shocked” to see his father posthumously perform at Glastonbury alongside former bandmate Sir Paul McCartney.

McCartney took to the stage on Saturday, June 25 to not only become the oldest solo headliner at the festival but also to surprise fans with a virtual duet of I’ve Got a Feeling with his late bandmate and close friend John Lennon.

The duet was made possible by Peter Jackson who recently made the Beatles documentary Get Back and utilised artificial intelligence to reunite the two Beatles icons on stage.

“One day, Peter Jackson rings me up and says he can take John’s vocals and isolate them so that you can play live with John on tour. He said do you fancy that?”

Following the duet, McCartney told the audience, “that’s so special for me man”.

Lennon’s son, Julian initially was not as accepting of the surprise performance, telling The Daily Mail he was not entirely comfortable watching it.

“I watched it on YouTube and I kind of went ”Errrr, I don’t know if I’m comfortable with that’. It shocked me,” he said.

After a few months, however, Julian decided to give the video another go and found that he “actually enjoyed it”.

While performing at Glastonbury’s iconic Pyramid Stage in front of a crowd of thousands for an incredible set that lasted over two hours, McCartney was greeted with a surprising and touching rendition of Happy Birthday from the crowd for his milestone 80th birthday which he celebrated on June 18.

“For me?” McCartney said in surprise as the crowd began to sing.

“Oh man, it’s so good to be here. We were supposed to be doing this three years ago.

Julian also made headlines with a performance of his own recently after he broke a longstanding vow and performed his late father’s most iconic song, Imagine, for the first time ever.

Previously promising never to perform the hit song, the 59-year-old singer-songwriter was so troubled by the “unimaginable tragedy” and the brutal invasion of Ukraine by Russian forces, that he felt compelled to cover his father’s peace anthem as part of the Stand Up For Ukraine campaign, a global fund-raising effort broadcast from Warsaw, Poland.

“I had always said, that the only time I would ever consider singing ‘Imagine’ would be if it was the ‘End of the World’,” he said.

“Today, for the first time ever, I publicly performed my Dad’s song, ‘Imagine’…The song reflects the light at the end of the tunnel, that we are all hoping for.”